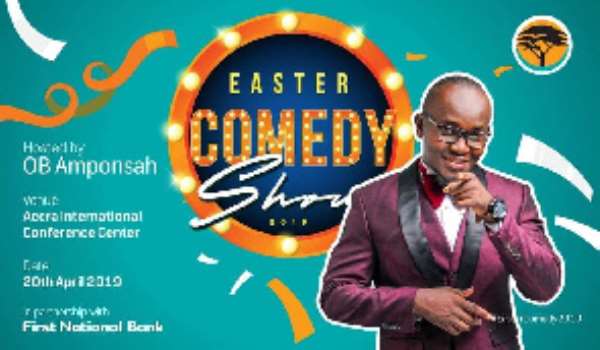 "Easter Comedy has been able to successively host continental comedians to lock horns with local performers and anytime the show comes off, it's well organised. Especially the Ghanaians... Easter Comedy is helping us regain confidence in Ghanaian comedy. I've always enjoyed the editions kudos to Nabil and his team" Arnold hinted.

On his part, Dada Hafco observed that there is lack of attention for the comedy sector in the entertainment industry. "In times like this when Easter Comedy is on, I urge all to come out to support it. Let's go out and watch the show this Easter and have fun with our family and friends". The VGMA 2019 nominee stated.

The annual Easter Comedy is a humour fiesta mixed with music and great human interaction experience.

The tradition of the show is centered around the yearly Easter festivities where the best of comedians around the world are put on the same platforms with their Ghanaian counterparts to serve nothing but laughter and great humour to patrons.

This year is no different. Organizers are poised to make this Easter edition the best so far. Great ambiance for networking and family time, friends 'meet and greet' atmosphere, non-stop music and endless laughter by the most creative and best humour artists in the world.

The official MC is OB Amponsah, a comedian and medical practitioner with live music performances from Akwaboah and KiDi. More acts are to be announced soon ahead of the event date on April 20, 2019, at the plush Accra International Conference Center.

The 2019 Easter Comedy show is in partnership with First National Bank.

I've toured the country and majority want to vote for compas...
12 minutes ago