"I Am Only Lawyer Nti When I'm On Set, I Am Different In Real Life"- Richmond Xavier Amoakoh 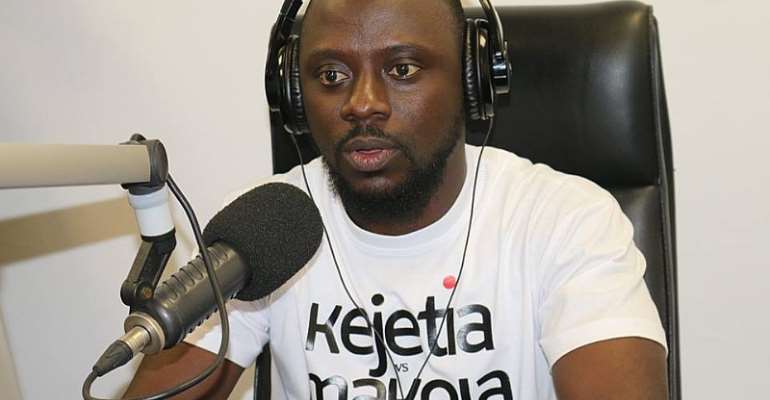 Richmond Xavier Amoakoh, popularly known as lawyer Nti, has debunked claims that his role as a comedian affects his English language. Richmond who plays the role of Lawyer Nti says in “Kejetia vs. Makola” series on Joy Prime, claims that his funny character is only to make the audience laugh but it doesn’t affect his grammar in any way.

The hilarious Lawyer Nti is a character with bad grammar, colourful shirts, overly big or tight jackets and his signature gloves with a bad reputation for losing cases to the extent that when he wins is a cause for celebration.

In an interview on Accra-based Hitz FM, the comedian said although he is not too fluent in spoken English, he is good when it comes to writing it.

“I don’t speak English very well… when people say it affects me… it’s does not in any way, my English level is the same, my English is not good, I can’t speak very well but I write very well”.

The comedian also rebutted the public perception about him not being sociable, explaining that he is only “lawyer Nti” when he is on set.

He said the personality he portraits depends on when and where he is, adding he is able to switch at any time.

Lawyer Nti, however, stated that he is affected when people criticise the TV series to be ‘stale’ because to him, he has given out his best since they started the series.

“We gave people too much in very little time so it got to a time people felt it series was stale and we have relax…when I’m shooting I don’t play with my people, I focus. I know what this means to people so when I’m doing it series, I do it with my all.

“That is how I have been doing from day one until now so when people said you have to relax, it got to me somehow,” he explained.

‘Kejetia Vs Makola’ is an urban satirical show and a subversion of the Law Procedural genre. The production is unscripted and the actors purely deliver on skill and talent.

The first of its kind on the Joy Prime channel, it follows the amusingly unconventional legal battles between a band of misfit lawyers claiming to have been trained at a certain Ghana School of The Law somewhere at Kejetia and their colleagues from Ghana School of Law at Makola.

For a quick relieve of stress and all the pressure from life, all you need is a single dosage of this comedy.