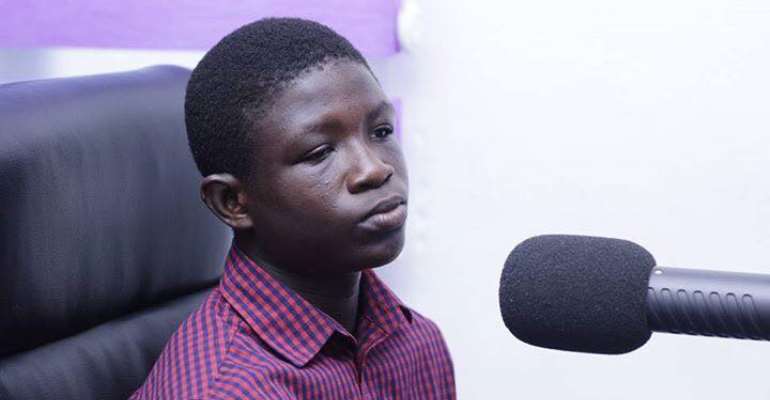 I Know we all remember Strika, the young actor who featured in the popular beast of No Nation film, the same movie that catapulted Abraham Attah to fame.

Life has not been that easy for the lad after that movie. Ghanaians were not hearing much about Strika until a few months back when pictures of him surfaced online leading him to gain media interviews.

Following the numerous interviews he had months back, Strika was missing in action again.

Strika has been spotted by the roadside begging for money and it is disheartening. Starr FM’s Caleb Nii Boye who saw the young actor by the roadside and whisked him away from the place tells Zionfelix.net that the boy’s condition was not good at the time he saw him.

Caleb in a post on Facebook Zionfelix.net read disclosed that the actor sells yam at Agbogbloshie Market in Accra.

“I am sad this morning.
I was heading to the Ghana Institute of Journalism campus and I met Striker. You would ask who is Striker? Striker starred in the movie Beast of No Nations. The said film that made Abraham Attah.

Today I met him begging for money on the road leading to GIJ. I called him and brought him to campus.

Zionfelix.net reported two years back that Kobina Amissah-Sam who played the role of Agu’s father in the movie “Beasts Of No Nation” has said in an interview that producers of the movie are taking good care of Strika and other casts of the movie.

“They have not been forgotten, they have really been taken care of. They are not lacking now as they used to so everything is cool for them now.

He has never been in school before but after the production, producers of the movie felt that they have to put him in school.

I don’t think that it is Netflix that is taking care of them, it is the producer who wants to help the kids. He is taking care of the three kids, Abraham, Striker and there is one other guy called Justice who stepped on Agu’s head when he was caught.” Kobina Amissah-Sam told MzGee of Hitz FM.

See Strika’s condition in the photos below:

Police beef-up security at traffic intersections over daylig...
12 minutes ago