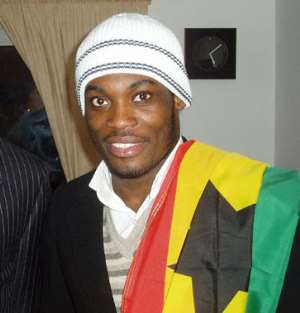 Chelsea's Ghanaian midfielder, Michael Essien has declared his unwavering commitment to Ghana and the Black Stars and stressed that he “is always willing and ready to play for the senior national football team”.

He said he was saddened by the injury which kept him out of the recent Africa Cup of Nations tournament held in Egypt and revealed that he was eagerly looking forward to participating fully in the Black Stars' training matches and the World Cup finals in Germany in summer.

Michael Essien gave the assurance in London when he paid a courtesy call on His Excellency, Mr. Isaac Osei, Ghana's High Commissioner to the UK. He was accompanied by Mr. Peter Kenyon, Chief Executive of Chelsea and Mr. Simon Greenberg, Communications Director of the club.

Welcoming the team, Mr. Isaac Osei said Ghana was proud that one of its internationals was playing for the most prestigious premiership club and urged Chelsea to ensure that the player was also kept fit for important national assignments for the Black Stars

Since most players of the Ghana national team were playing in various leagues around the world, the High Commissioner stressed that it was of critical importance for Ghana to deepen collaboration with the premiership leaders for the timely release of the Ghanaian midfielder for important tournaments as it would be with other internationals playing elsewhere.

“I believe that Ghana is bigger than any single player, so every Ghanaian player should be proud to don the Black Stars jersey just as past heroes like Abedi Pele and Tony Yeboah” declared the High Commissioner.

Mr. Osei thanked Mr. Kenyon for the visit and was optimistic that the bond that had been forged between Ghana and Chelsea by the gesture would be nurtured to pave way for more Ghanaian footballers to play for Chelsea and other premier clubs in the UK.

On his part, Mr. Kenyon said Chelsea is a team with 19 professionals from around the world and was proud of their contribution to the club.

Chelsea club, he said “is looking forward to fruitful collaboration with the FA in Ghana”