Cannabis Intake On The Rise 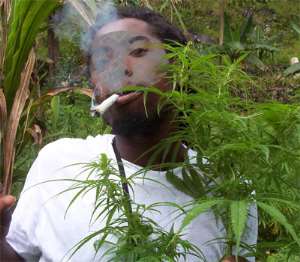 Cannbis consumption in the country and its health-related problems are rising at a rate health workers say pose a danger to the productive group of Ghana's population.

Ms Alice Mintah, a Principal Nursing Officer attached to the Narcotics Control Board, who made the disclosure to the Daily Graphic, indicated that almost 80 per cent of all reported cases of mental ailments in the country were associated with the abuse of the substance.

This related to people within the productive ages of 15 and 50 years, with three involving men between 71 and 80 years.

Eighty of the 1,531 reported cases were females. The figures do not include those cases reported to private treatment centres across the country.

The number of unreported cases could even be higher, calling for urgent attention to address the problem.

Ms Mintah said out of the total number, 839 were products of basic schools (junior secondary school graduates), 507 were of second-cycle background, 66 of tertiary education status and 119 were illiterate.

She said the most abused substance was cannabis, with 934 people being treated in connection with its use, 426 treated for alcohol abuse, 148 for multiple drugs, 11 for cocaine, six for pethidine, five for heroin and one for valium.

Ms Mintah said second-cycle students remained the most vulnerable as they were often lured into the practice by friends.

She explained that through counselling of the patients, it became evident that a lot of the victims took to substance abuse out of ignorance or curiosity, while others did not even know of the effects of the drugs.

She said through interaction with some of the victims, it became clear that although some of them knew of the consequences of taking the drugs, they went ahead to take it as a way of experimenting with it or to have a firsthand experience.

Ms Mintah said apart from students who took the drugs with the view to aiding them to study or becoming 'bold', workers took the substance to allegedly psyche up for work to attain what they called 'strength'.

She said the worrying aspect of the abuse was the fact that it was mostly the youth who abused the various substances, saying that that was not good for the country.

She, therefore, called for the intensification of public education and the involvement of parents and organisations to help reduce the menace.

Ms Mintah said although it was impossible to eliminate the canker of substance abuse, public education could help minimise it.

Bibiani: Boy Who Defiled 4-Year-Old Girl And Used Knife To O...
7 hours ago