Ghana 'can take on anyone' after dramatic South Africa triumph – Gyan 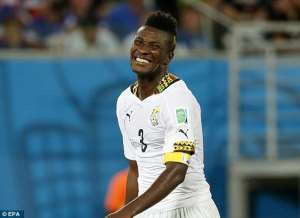 Ghana captain Asamoah Gyan said his side would not fear anyone after reaching the quarter-finals of the Africa Cup of Nations.

Ghana went through after beating South Africa 2-1 and will meet the Group D runners-up in the quarter-finals on Sunday evening.

“With this team we can take on anyone in this competition,” he said.

Algeria qualified as Group C runners-up and coach Christian Gourcuff said: “It was not easy to get out of this group.”

Gyan scored Ghana's late winner in their second game against Algeria which ultimately helped them finish top of the table on head-to-head record.

He added: “I have played at five cups of nations, but this group was the hardest.

“We were very strong mentally, even after conceding the first goal. We kept believing and fought to the end knowing that we could win.”

Ghana manager Avram Grant said: “We deserve it because South Africa were not better than us.

“We have finished first in the group of death, which is not bad. After losing the first match we showed great attitude in the second and continued along the same lines today.

“We started the match very well with two or three good chances. We had the match in our hands. I am very happy that the players showed, just as in their last match, a good spirit and good attitude.”