Kufuor's Police On The Rampage

By The Lens ([email protected]) 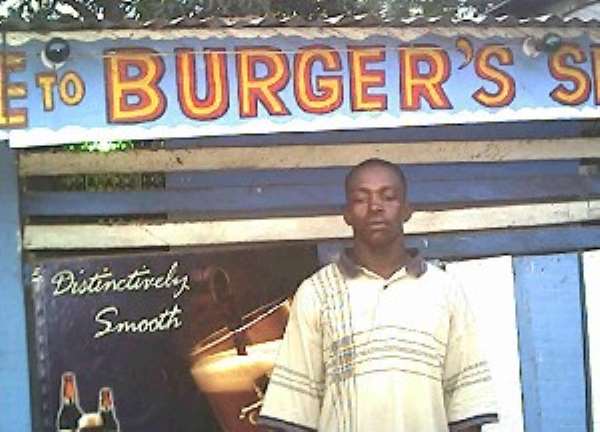 A dangerous breed of Policemen, that have earned the tag of “Kufuor Police” or “NPP Police”, has started a campaign of terror and killing of innocent individuals. The first such victim is a twenty eight year old man, Samuel Samani, a resident of Madina who on Sunday 18th April, 2004 was killed in cold blood by one of these dangerous breed of policemen.

We publish below the gory details of Samuel Samani's murder as narrated to The Lens by Thomas Samani, brother of the deceased.

“At about 6 am on that fateful Sunday, I was informed by a gentleman named Maxwell that the leader of the “Special Policemen” known as Killer, had threatened to harm my younger brother, Litman Samani for daring to report them at the Police Headquarters.”

“On hearing this, I went with Maxwell to the barracks where Killer and his group live. Upon meeting Killer, I asked him why he was issuing threats against my brother. Killer denied ever issuing any threats against Litman. He was so infuriated that he attacked Maxwell and started beating him for spreading lies about him.”

At about 9.00am of that same day, word got to me that Killer and his group had gone to attack Litman at his beer bar. I rushed there only to be told that Litman had been taken away. I went to the barracks in search of Killer with a view to enquiring after the whereabouts of my brother. My elder brother, Samuel Samani, who had then just returned from work, accompanied me together with one other person. On arrival at the barracks, I met Killer in the company of two of his colleagues by name Survival and Commando.

“As soon I started questioning Killer about the whereabout of my brother, a member of the squad shouted and called out for others. Immediately a number of them came out wielding their guns. Soon after, one of them, who I knew as Dominic Gorribilla, because he comes from a village called Gorri, near Bolga, aimed his gun at the ground close to our feet and started firing.

“When they realised that we were not afraid, one of them whom I later got to know is called Thomas Addae, rushed from behind, seized a gun from one of his friends, aimed at Samuel Samani and shot him three times, one in the groin, another in the thigh and the third one in the knee.

“When my brother collapsed on the ground, the members of the squad began to retreat; I went after them and shouted that they kill me too. But they moved away from me. Fortunately, some good Samaritans nearby helped put my brother onto a passing trotro and rushed him to the Legon hospital; owing to the seriousness of his wounds he was immediately referred to the 37 Military hospital. So grave was his condition that he later died.

The Lens hopes that the various religious leaders, the chiefs, the human rights agencies as well as the foreign embassies in the country are taking a serious note of these dangerous developments in this era of so-called freedom under Kufuor.

Litman Samani also relates his ordeals at the hands of Kufuor police Giving the background to the whole incident, Litman Samani told The Lens that during the night of 6th March 2004 at about 8.30pm, some members of the Kufuor Police together with some regular policemen from James Town arrested him for no reason and extorted an amount of one million five hundred thousand (¢1.500,000.00) from him as well as his Nokia mobile phone from.

“The next day I reported the matter to the Madina Police, and I assisted them to trace and arrest one Dela, a policeman at the James Town police station and another colleague of his. My mobile phone and money were retrieved from them.

“On handing over the mobile phone and the money to me the CID officer at the Madina Police station, Mr. Osei Kwadwo, advised me to drop the case, but I insisted that the case be sent to court. I travelled to my hometown and on my return I went back to see the CID officer to send the case to court. But he was reluctant, so on 14th April 2004, I went to the Police Headquarters where I reported the matter to a very Senior Police Officer called Tim.

“Officer Tim on hearing my case called the CID officer, Mr. Osei Kwadwo, and after ascertaining that all what I had told him were true, he directed Mr. Osei Kwadwo to ensure that the case be sent to court on 19th April 2004.

“Having apparently heard that the case would be sent to court on the 19th of April 2004, the Kufuor Policemen who were part of the perpetrators sought to silence me through intimidation.

“So from 16th of April they began a campaign of harassment and intimidation against me. On 17th April at about 9.00pm Killer and some other Kufuor Policemen came to where I operate my 'round board' game and said that they were arresting me for operating a game without license.

“Fortunately Mr Thomas Kojo Frafra, a respected member of the Frafra community in the area was then passing by, so he came to the spot and intervened. He told Killer and his colleagues that he was aware that I have obtained a licence for the game, so they should allow me to go and bring the licence. Killer and his colleagues released me and I went to bring them the licence, after which they left.

“The next day, Sunday 18th April 2004, at about 8.30am, I was in my beer bar when Killer and his colleagues, numbering about twenty, came there all of them armed with rifles. They insisted on searching my bar but I refused to allow them, and I blocked the entrance into the bar proper. So they started beating me up, hitting me with their rifles and other things.

“At a point I could not withstand the beatings any longer so I fell on the ground and they started stamping on me all over. One of them entered the bar and opened the drawer where I keep my monies and took out a bag containing an amount of six million seven hundred and seventy thousand cedis (¢6,770.000.00). When I tried to reach for the bag, the others pummelled me some more and the one who took the money went away with it. In the process I had sustained injuries all over my body and was bleeding from my nose and ears.

“As the Kufuor Policemen were leaving my bar, one Marcus, a regular policeman at the Madina Police station arrived on the scene and told them that they should take me to the police station and make a case against me otherwise there would be trouble for them.

“Upon this advice, Killer and a few of his colleagues dragged me to the Madina Police station. Initially the Madina Police refused to take custody of me because of the injuries I had sustained, but they later detained me behind the counter.

Litman then went to the Legon Hospital for treatment. It was while there that his senior brother Samuel Samani, now deceased, was rushed in with gunshot wounds. The doctor seeing the gravity of his condition said that he could not treat him at the Legon hospital and said that he should be taken to 37 Military hospital.”

Meanwhile, Police sources at the Police headquarters are tight-lipped on the matter most probably because it involves Kufuor's Special Policemen. All the Lens could elicit from the officers was: “we are investigating the matter.” Observers are however worried that like all the other shooting incidents that have occurred under the Kufuor regime, (the Taifa killing, the trotro driver who was shot behind his steering wheel around Nungua, the killing of the Ya-Na and over forty others at Yendi, and many others), this case involving agents of the power establishment would go the way of all the afore-mentioned cases; viz. treated as a foolish case in order to allow those responsible for this cold blooded murder to walk away free just as all the others.