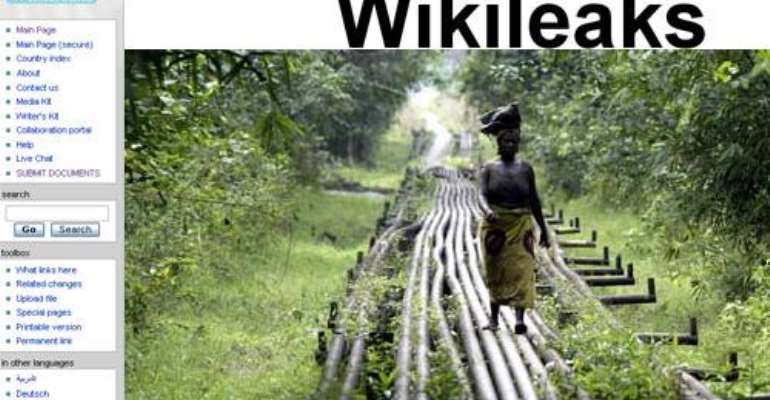 The whistle blowing activity of Wikileaks centers on Nigeria. Apparently, Oil gaint Shell has a grip on the Nigerian state as the recent cable reveals that Shell has insiders in every key ministry of the Nigerian government with the government having no idea. Reactions have followed as expected. As well as providing US Diplomats name of politicians suspected to support and fund militancy in the restive Niger Delta area. See report published by the UK Guardian below:

The oil giant Shell claimed it has inserted its staff into all key ministries of the Nigerian government, giving it access to politicians' every move in the oil-rich Niger Delta, according to a leaked US diplomatic cable.

The company's top executive in Nigeria told US diplomats that Shell had seconded employees to every relevant department and so knew “everything that was being done in those ministries”. She boasted that the Nigerian government had “forgotten” about the extent of Shell's infiltration and were unaware of how much the company knew about its deliberations.

The cache of secret dispatches from Washington's embassies in Africa also revealed that the Anglo-Dutch oil firm swapped intelligence with the US, in one case providing US diplomats with the names of Nigerian politicians it suspected of supporting militant activity and requesting information from the US on whether the militants had acquired anti-aircraft missiles.

• US diplomats fear that Kenya could erupt in violence worse than that experienced after the election in 2008 unless rampant government corruption is tackled.

• America asked Uganda to let it know if its army intended to commit war crimes based on US intelligence – but did not try to prevent war crimes taking place.

• Washington's ambassador to the troubled African state of Eritrea described its president, Isaias Afwerki, as a cruel “unhinged dictator” who's regime was “one bullet away from implosion”.

The latest revelations came on a day that saw hackers sympathetic to WikiLeaks target Mastercard and Visa over their decision to block payments to the whistleblowers' website whose founder, Julian Assange, spent a second night in jail after a judge refused him bail ahead of an extradition hearing to face questioning over sexual assault charges in Sweden.

Campaigners tonight said the revelation about Shell in Nigeria demonstrate the tangled links between the oil firm and politicians in the country where, despite billions of dollars in oil revenue, 70% of people live below the poverty line.

Cables from Nigeria show how Ann Pickard, then Shell's vice-president for sub-Saharan Africa, sought to share intelligence with the US government on militant activity and business competition in the contested Niger Delta – and how, with some prescience, she seemed reluctant to open up because of a suspicion the US government was “leaky”.

But that did not prevent Pickard disclosing the company's reach into the Nigerian government when she met US ambassador Robin Renee Sanders, recorded in a confidential memo from the US embassy in Abuja on 20 October 2009.

At the meeting Pickard related how the company had obtained a letter showing that the Nigerian government had invited bids for oil concessions from China. She said the minister of state for petroleum resources Odein Ajumogobia had denied the letter had been sent but Shell knew similar correspondence had taken place with China and Russia.

The ambassador reported: “She said the GON [government of Nigeria] had forgotten that Shell had seconded people to all the relevant ministries and that Shell consequently had access to everything that was being done in those ministries.”

Nigeria is Africa's leading oil producer and the eighth biggest exporter in the world, accounting for 8% of US oil imports. Although a recent UN report largely exonerated the company, critics accuse Shell, the biggest operator in the delta, and other companies, of causing widespread pollution and environmental damage in the region. Militant groups engaged in hostage-taking and sabotage have proliferated.

The WikiLeaks disclosure was today seized on by campaigners as evidence of Shell's vice-like grip on the country's oil wealth. “Shell and the government of Nigeria are two sides of the same coin,” said Celestine AkpoBari, programme officer for Social Action Nigeria.

“Shell is everywhere. They have an eye and an ear in every ministry of Nigeria. They have people on the payroll in every community, which is why they get away with everything. They are more powerful than the Nigerian government.”

The criticism was echoed by Ben Amunwa of the London-based oil watchdog Platform. “Shell claims to have nothing to do with Nigerian politics,” he said. “In reality, Shell works deep inside the system, and has long exploited political channels in Nigeria to its own advantage.”

Nigeria tonight strenuously denied the claim. Levi Ajuonoma, a spokesman for the state-owned Nigerian National Petroleum Corporation, said: “Shell does not control the government of Nigeria and has never controlled the government of Nigeria. This cable is the mere interpretation of one individual. It is absolutely untrue, an absolute falsehood and utterly misleading. It is an attempt to demean the government and we will not stand for that. I don't think anybody will lose sleep over it.”

Another cable released today, from the US consulate in Lagos and dated 19 September 2008, claims that Pickard told US diplomats that two named regional politicians were behind unrest in the Rivers state. She also asked if the American diplomats had any intelligence on shipments of surface to air missiles (SAMs) to militants in the Niger Delta.

“She claimed Shell has 'intelligence' that one to three SAMs may have been shipped to Nigerian militant groups, although she seemed somewhat sceptical of that information and wondered if such sensitive systems would last long in the harsh environment of the Niger Delta,” the cable said.

Shell put a request to the US consulate for potentially sensitive intelligence about its possible rival, which she said had secured a promise from the Nigerian government of access to 17 trillion cubic feet of natural gas – roughly a tenth of Nigeria's entire reserves. “Pickard said that amount of gas was only available if the GON were to take concessions currently assigned to other oil companies and give them to Gazprom. She assumed Shell would be the GON's prime target.” Pickard alleged that a conversation with a Nigerian government minister had been secretly recorded by the Russians. Shortly after the meeting in the minister's office she received a verbatim transcript of the meeting “from Russia”, according to the memo.

The cable concludes with the observation that the oil executive had tended to be guarded in discussion with US officials. “Pickard has repeatedly told us she does not like to talk to USG [US government] officials because the USG is 'leaky'.” She may be concerned that…bad news about Shell's Nigerian operations will leak out.”

Shell declined to comment on the allegations, saying: “You are seeking our views on a leaked cable allegedly containing information about a private conversation involving a Shell representative, but have declined to share this cable or to permit us sufficient time to obtain information from the person you say took part in the conversation on the part of Shell. In view of this, we cannot comment on the alleged contents of the cable, including the correctness or incorrectness of any statements you say it contains.”

Also revealed is a cable made during the political turmoil in the country early this year when Yar'Adua was alive and ailing in February.