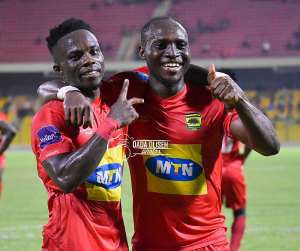 Asante Kotoko survived an early scare from Bechem United this evening as they recovered from a goal down to eventually emerge as 3-1 winners at the Accra Sports Stadium in the Ghana Premier League.

The record league champions went into today’s match on the back of successive defeats against Aduana Stars and Asokwa Deportivo which had left management and supporters fuming with displeasure.

In need of a win to appease the Kotoko family, the Porcupine Warriors found themselves in trouble just 21 minutes into the first half. Bechem United star man Hafiz Konkoni got into a good position and buried his effort into the back of the net to put his team in front.

Now trailing and in trouble, the home team upped their game as they tried to get an equalizer before going into the break. After constantly piling pressure on the away team, the Reds finally got their breakthrough on the 34th minute courtesy a strike from Martin Antwi.

After recess, Maxwell Konadu’s men showed desire and went for the kill straight away. An equalizer from defender Moro Ibrahim handed the team a two-goal lead to give the side some comfort.

Three minutes after the hour mark, Bechem United defender Charles Bosompem was shown the red card, forcing his team to play with 10 men for the remaining minutes of the second half.

With a man advantage and a comfortable lead, Asante Kotoko managed time and ensured they eventually cruised to a deserved 3-1 win.