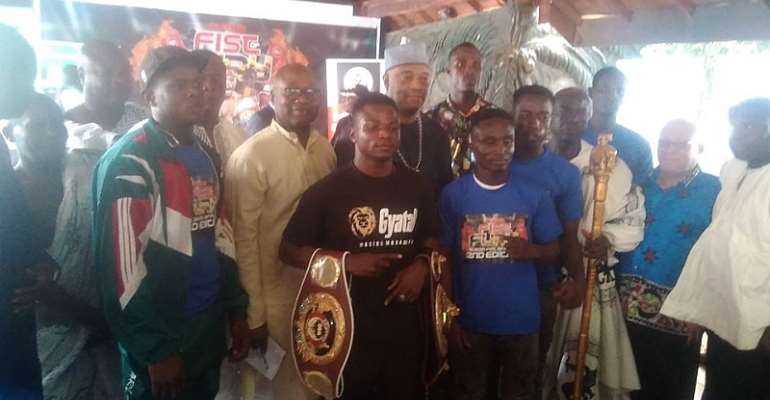 Nii Teiko Tsuru II, the Ga Manste has on Tuesday, January 21, 2020, launched the second edition of the Bukom Fist of Fury Boxing League at the MG Grand Hotel at East Legon in Accra.

The royal highness who was a special guest of honour urged the boxers on the fixtures for the programme to be disciplined and work hard to become world champions in future.

He commended the organisers of the Bukom Fist of Fury which has become a national programme with the inclusion of boxers from other regions in Ghana, as well as the media who have carried the innovative event to the world.

Nii Teiko Tsuru II who was accompanied by the Abola Manste also hailed the sponsors and advised other companies to support Ghana Boxing.

Mr. Alhassan Yakubu – Tali, Deputy Managing Director of Agricultural Development Bank (ADB), one of the sponsors of the League said his company was proud to partner the Ghana Boxing Authority, the Ghana Boxing Federation and the Ghana Juvenile Boxing Board for the bold step to organize the event which seeks to produce more boxing talents and champions for the nation.

He hinted that the boxing profession requires the appropriate training and discipline to become a professional and win local and international fights.

He noted that bringing on board other boxers from the other regions is in the right direction.

“ABD’s association with this important event is because of the huge potential it possesses to create jobs for the youth and the fact that apart from football, thee boxing profession is the only sports that have brought more smiles on the faces of many Ghanaians and placed us on the international stage. I am hopeful by the end of this boxing league, a new set of professional boxers will be discovered and once again, Ghana well bounce back onto the international boxing stage” he expressed.

Lawyer Moses Foh Amoaning, former GBA president and consultant on the programme said Ghana Boxing deserves better as they have won 10 world titles and there are more boxing coming up to do greater things, like Wasiru Mohammed and Jessie Manyo Plange, former Black Bombers skipper who are appearing on the bill in their professional championships against boxers from Benin and Tanzania respectively.

Commey promised that he will return to become a two-time world champion.