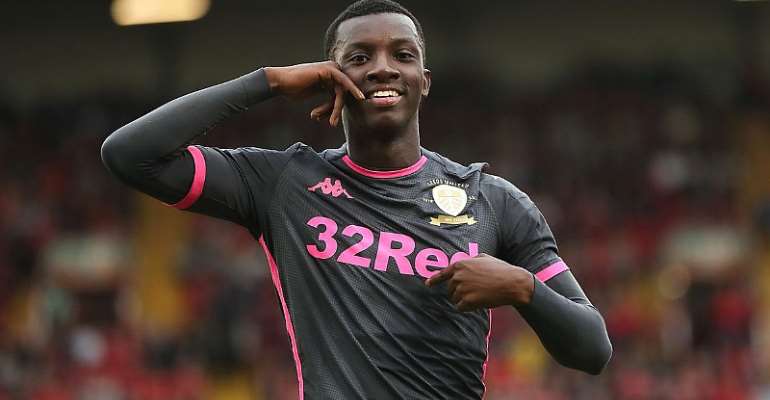 English Premier League side Arsenal has ended the loan spell of young forward Eddie Nketiah after deciding to recall him from English Championship club Leeds United.

The English-born striker of Ghanaian descent was sent out on loan in the summer transfer window by former manager Unai Emery in a bid to get him regular playing time.

He was expected to spend the entire 2019/2020 football season on loan at Leeds United but the Gunners have decided to cut his stay short.

Eddie Nketiah featured in his last match for the Peacocks earlier this afternoon where he helped the club to earn a point after drawing 1-1 with West Brom United at the Hawthorns.

Speaking to Radio BBC Leeds at the end of the match, Leeds United boss Marcelo Bielsa confirmed that indeed Arsenal has recalled the young attacker.

He said: “The club and him informed us that he is not going to continue with us. We are sorry for that”.

“We know what we offered to him maybe was not what the club (Arsenal) expected.

“He is a great player and excellent professional. He has been developed with a good education and for this reason it is a pity for us that he leaves us. We were happy with him”.

Nketia, 20, returns to Arsenal to work under new manager Mikel Arteta who was recently appointed to the position vacated by Spanish tactician Unai Emery.