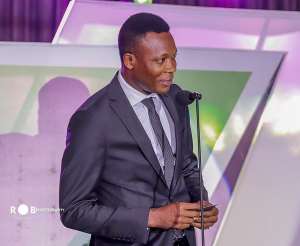 Head coach of Wa All Stars, John Paintsil has expressed a huge disappointment in the technical team he introduced at the club after they refused to back him.

On Tuesday, December 10, the former West Ham defender was forcefully driven away from the Wa All Stars training ground by one Frederick Agbenyo accompanied by a "macho" man, according to Paintsil.

According to Paintsil, the technical team he brought to the team to work with as his backroom staff, never backed him in the case but have turned their back on him in support of his destructors.

"I don't want to do anything that will destroy what we are building and at the end of the day what happened that day I think, affected all the players", John Paintsil told FOX FM in an interview.

" I'm more than a coach there (at Wa All Stars) so what belongs to you you don't take it by violent means, so I willingly left the pitch, but what makes me more disappointed is that my technical men I brought turned their back [on me] then they are with them doing those things to me", Paintsil lamented.

"For me, I don't know whether it is good to help people or rather better you don't, so it will be advice to a lot of people because they should understand that I'm not just the coach and nobody is sacking me to take my job, I brought you so they should advise themselves whatever they are doing", he added.

Fighting your husband's side chicks is wrong; you could even...
57 minutes ago