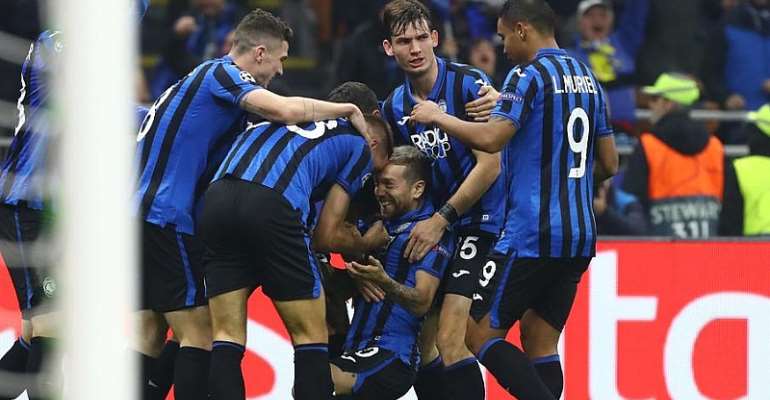 Atalanta reached the Champions League last 16 in their first season in the tournament on Wednesday after a 3-0 victory over Shakhtar Donetsk in Group C.

The Italians, who were without a point until their fourth game in the campaign, joined Manchester City in the knock-out stages as Dinamo Zagreb failed to beat the English champions in Croatia, losing 4-1.

Timothy Castagne, Mario Pasalic and Robin Gosens scored in the second half for the side who finished third in Serie A last season to reach the top tier of European football for the first time.

"It will remain in the history of football and of this club. I think it'll also stay long in the memory of everyone who was in the stadium," captain Alejandro Gomez told broadcasters Sky Sport Italia.

"All of us here at Atalanta came from humble roots, nobody here can be called world class or a superstar name, but we achieved this result through hard work and sacrifice," Gomez added.

The defending Ukrainian league and cup champions, who play their home matches in the city of Kharkiv due to the ongoing conflict in the east of the country, will play in the last 32 of the Europa League after the defeat.

Atalanta's Gian Pero Gasperini made three changes to the starting line-up from the weekend's victory over Verona including bringing in Gosens for the injured Josip Ilicic.

The visitors, who drew with City in November to avoid defeat for the first time in the European campaign, started the more positive.

Attacking midfielders Pasalic and Gomez both failed to open the scoring despite superb chances in the first quarter of an hour.

SECOND-HALF GOAL SPLURGE
Castagne broke the deadlock for the travelling side on 67 minutes despite VAR checking if skipper Gomez was offside.

Midfielder Castagne slotted home from Gomez's cross after tidy build-up play on the edge of the Shakhtar box.

The home side's hopes of reaching the knockouts were dealt a blow after a bizarre refereeing decision.

Thorsten Schiffner sent defender Dodo off on 77 for striking an opponent but the right-back seemed to make minimal contact with Remo Freuler.

Gasperini's men clinched their place in the club's history books with nine minutes to play as Pasalic beat Andriy Pyatov with the slightest of touches from a Ruslan Malinovskyi free-kick hit from near the corner flag.

Gosens added the third in the fourth minute of injury time after a Taras Stepanenko defensive howler in his own penalty area.