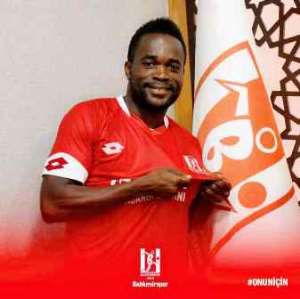 The Ghanaian international parted ways with the Turkish second-tier side in May following the club’s inability to pay his wages.

The 27-year-old striker announced on Thursday that he had rejoined the Turkish side after all differences were resolved.

The former Hearts of Oak skipper joined the Turkish Liq 1 side two seasons ago from Istanbul-based Ümraniyespor where he played 67 games in all competitions and scored 17 goals and 6 assists.

He has been a key member of the club as they continue their push for promotion to the top flight, hence their determination to still keep him.