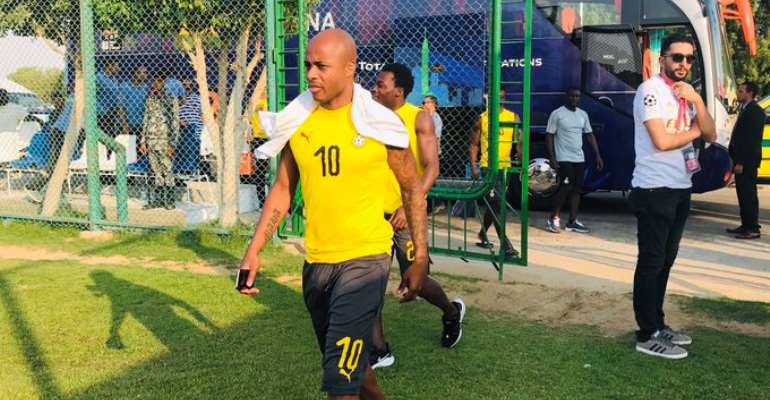 Black Stars skipper, Andre Dede Ayew, has returned to training for tomorrow’s crucial Group F match against the Indomitable Lions of Cameroun at the Ismailia Stadium.

This was after he was declared fit by the medical team from an ankle injury he sustained during last Tuesday’s group opener with Benin which ended 2-2.

Having missed the team’s training sessions on Wednesday and Thursday, the news of Dede’s return came as a welcome relief to the Stars players and officials, barely 24 hours to the Cameroun game.

Until then, a cloud of uncertainty had engulfed the team’s camp as Ayew’s right ankle injury confined him to the bench as a mere spectator, while his teammates went through the drills towards the big game.

The anxiety heightened on Wednesday when Stars’ midfielder, Thomas Agyepong, who also got injured in the Benin match, was ruled out of Saturday’s game.

However, Coach Kwasi Appiah disclosed to Graphic Sports Online on Friday afternoon that the Stars skipper could be available for selection against Cameroun, all things being equal.

“We will watch him at training today to finalise our team,” Coach Kwasi Appiah said.

The fitness level of Ayew in the Stars’ final training this evening will go a long way to determine his inclusion in Ghana’s starting line-up for Saturday’s match.

Dede cancelled Benin’s early lead in the 42nd minute, before his kid brother, Jordan Ayew, shot the Stars ahead in the second half only for two-goal hero, Mickael Pote, levelled up for his side later.