AWCON 2018: Cameroun Out For Revenge Against Nigeria 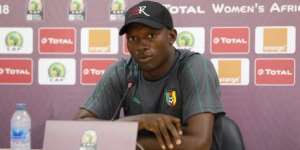 Cameroun will be aiming to end Nigeria’s dominance over their team when the two sides meet on Tuesday at the Accra Sports Stadium in the semi-finals of the Total Women’s Africa Cup of Nations. Kick-off is at 3.30 pm.

Two years ago, Nigeria defeated Cameroun 1-0 at the final of the Women’s AFCON in front of a capacity crowd in Yaounde to win their eighth title. A late goal from forward Desire Oparanozie proved valuable for the Super Falcons to retain the trophy they won in

Namibia in 2014, while the Indomitable Lionesses finished as runner-up.

For Tuesday's semi-final, Cameroun have hinted that they would approach it with revenge on their minds.

At Monday's pre-match press conference, Cameroun’s head coach, Touongo Ndoko Joseph Brilliant, noted that his team were determined to stop the Super Falcons in pursuit of their first Women’s AFCON title this year.

“We have made mistakes previously but we have tried to correct our mistakes and we go into this game and play our hearts out knowing that there’s always a first time, and maybe tomorrow may be the first time for Cameroun. If we don’t score, we will not allow Nigeria to score a single goal because we will play till the 94th minute and make sure we come out victorious,” promised Coach Brilliant.

“I am not worried about Nigeria because I have very good players in my camp who I believe are better than some of the Nigerian players. We came here to play five matches including the final and nothing has changed our plan, we are focusing and making sure we are eliminating any team that comes our way.”

However, Nigeria’s head coach, Thomas Dennerby, called the bluff of his Camerounian counterpart and stated that the Falcons were determined to maintain their dominance over their northern neighbours.

“I know the history between the two teams but history does not matter tomorrow. Every game has its own life and other teams are coming closer so the Nigerian team has to work harder to beat any of the teams,” the Swede told the press.

“I have a really relaxed attitude to the game but that does not mean that we are not focused. We are doing our best. If you have a coach who is stressed, it affects the players so we are trying to be calm and confident and that is my approach to the game.

“We want to go back with the cup but the first thing is to secure a ticket to France next year and nothing has changed about that.

We have a good opportunity to do that tomorrow and we will do whatever it takes to win the game tomorrow then we can be relaxed for the final”, he stated.

In the other semi-final match on Tuesday evening, South Africa will take on Mali at the Cape Coast Stadium. Kick-off is at 6.30pm.