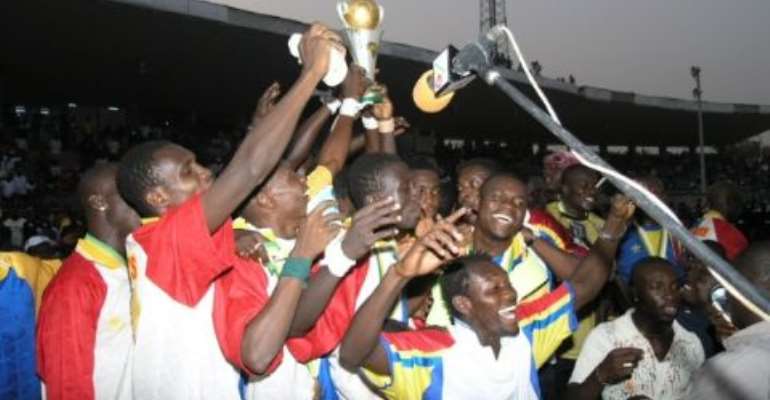 Accra, Nov 10, GNA - Nana Wereku Ampem the Second, President of the Council of Patrons of Accra Hearts of Oak Sporting Club has conveyed his warm congratulation and best wishes to the entire Phobian fraternity on the occasion of the club's 94th anniversary celebrations. The statement said that, "May succeeding years bring us peace, tranquillity and progress in all our endeavours as we approach the centenary of the founding of the club".

On the occasion of the 94th anniversary, which fell today, the statement praised the Almighty God for granting the Hearts fraternity the opportunity and privilege to celebrate such a joyous occasion. "We are enjoined by tradition and respect for history to acknowledge the very priceless contribution made by the founding fathers of the Club as well as the patrons, directors, management, technical, administrative staff and the playing body for their sacrifice and hard work in bequeathing such rich legacy to us".

Nana Ampem said, "It also falls in line to call to remembrance the contributions and sacrifices of some of our members who during the period under review were also summoned to ride on the direction of endless hope to the table of eternal peace"

It added that, "we regret with such sorrow the passing away of Ebenezer A Welbeck, (Assistant Chaplain), Edward J. N. Aggrey-Fynn, Goalkeepers Lante France and Salifu Ansah and the indefatigable Ofei Ansah who spent his entire life serving the club and even died in the line of duty as an acting coach of the Club".

The statement advised the present generation of Phobians that, "destiny has trust into our hands a torch and the only tribute we can pay to the memory of all those departed is to pledge to carry aloft that extinguishable torch".

"As we remember the departed souls, it is incumbent on all of us to send our heartfelt sympathies to the bereaved families and the Ga Traditional Council as they mourn the death of the illustrious Nii Amugi II, the Ga Mantse".

The statement said the club in recent years gives followers of the club something to cheer about even in the face of extreme financial difficulties and other circumstances well beyond the clubs control. "Our great Club in 2004 regained the league trophy it lost to Kumasi Asante Kotoko in the previous year and went ahead to raise the bar of continental excellence by becoming the first Ghanaian and African club to win the maiden CAF Confederations Cup".

It said what makes the feat more significant was the fact that it was achieved at the expense of their arch-local rivals Kotoko, to add to the previous victories in the 2000 CAF Champions League and the 2001 CAF Super Cup that placed the club on a pedestal that would take tons of sweat and blood by others to equal.

The statement commended the Interim Management Committee, Technical, Administrative Staff and the Playing Body and said at no time had such young and dedicated men serving in any interim capacity achieved this feat and said it was no wonder the Board of Directors subsequently confirmed their appointment.

It said even though the club's defence of the 2004 League trophy and the 2004 Confederations Cup trophies were not successful, it is the hope that lessons learnt will make it possible for the club to win local and continental trophies in the coming years.

The message also congratulated the senior national team, Black Stars on its maiden qualification to the FIFA World Cup in Germany next year and hoped that they will draw inspiration from this achievement to draw a program that would enable the team make its mark at the tournament.

On sponsorship, the statement congratulated the management for completing sponsorship deals with Areeba and 'Asare Original Pay All' and was optimistic that the value of such relationship will grow with the coming years.

The Statement said the long cherished dream of all true followers of the club to attend its Congress will soon materialise, barring any unforeseen circumstances as the C. K. Dewornu led Congress Organising Committee will ensure that it takes place so that a stock taking of previous activities of the club are approved.

"It is our hope that Congress will be the launching pad for greater things to come as the club will be revitalised as fresh faces are elected unto the Board of the club to run its affairs".

The statement continued that challenges that face the club in the coming years like preparation for the centenary, raising the level of professionalism to make the Club more marketable, expending the frontiers of the club domestically and internationally and getting supporters to comply with basic constitutional obligations like paying of dues and the expending the clubs infrastructural base appear daunting indeed.

It said to achieve these targets, it behoves on all in the Phobian fraternity to avoid complacency, rancour, divisiveness and disrespect to authority as such acts do not solve problems but rather compound them. "Let us all resolve to take advantage of the present seemingly peaceful atmosphere to conduct a peaceful Congress that will inject new light into the management of the club".

"May the coming years bring us peace, happiness and the realisation of our dreams and aspirations" 10 Nov 05