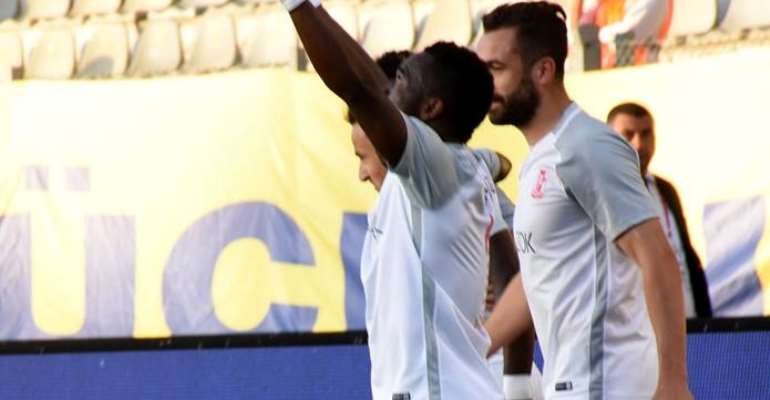 ENGLAND
Daniel Amartey, who is reported to be on his way to French side Nantes was missing from Leicester City's squad that recorded a 3-2 victory over Newcastle United. Christian Atsu returned from injury to make a cameo appearance for the Magpies.

Andre Ayew was introduced in the 79th for West Ham United in their shocking 1-0 victory over Chelsea.

Jeffery Schlupp kept up his superb form as he played full throttle for Crystal Palace as played out a 2-2 draw with Bournemouth.

Jordan Ayew was introduced in the 56th minute for Swansea City in their 1-0 win against West Bromwich Albion at the Liberty Stadium.

In the Championship, Phil Ofosu-Ayeh missed the Wolverhampton Wanderers goalless draw with Sunderland through injury.

Albert Adomah failed to conjure his magic for Aston Villa as they were held to a goalless stalemate at home by Millwall.

Andy Yiadom played the entire period for Barnsley in their 3-0 defeat at home to Derby County.

Ghanaian duo Tarique Fosu and Joe Dodoo were missing in Charlton Athletic squad that lost 1-0 at home to Portsmouth.

Harold Odametey lasted full minutes for Maidenhead in their goalless draw with Maidstone. His compatriot Nana Owusu was introduced in the 77th minute for Maidenhead.

Midfielder Nortei Nortey delivered for Dover Athletic in their 4-0 over Hartlepool.

Kwame Thomas lasted full throttle for Solihull in their 1-0 loss at Chester. Kwame Asante made a cameo appearance the losers.

Koby Arthur warmed the bench for Macclesfield as they walloped Wrexam 4-1 at home on Saturday.

SPAIN
Thomas Partey was taken off in the 93rd minute of Atletico Madrid 1-0 win at Real Betis.

Emmanuel Boateng plea was heard by coach Juan Munoz as he finally made playing minutes for Levante in their 2-1 home loss to Athletic Bilbao.

Mubarak Wakaso warmed the bench for Deportivo Alves in their 2-0 win over Las Palmas.

ITALY
Kwadwo Asamoah was in superb form for Juventus during their goalless stalemate with fellow title chasers Inter Milan at the Allianz.

Godfred Donsah performed admirably for Bologna despite their 2-1 defeat to AC Milan at the San Siro Stadium.

Rahman Chibsah lasted 70 minutes for Benevento Calcio in their 2-0 loss at Udinese. Bright Gyamfi picked a booking as he made a cameo appearance.

Alfred Duncan returned from a long layoff to play the last thirteen minutes for Sassuolo in their 2-1 win over Crotone at home.

In the Serie B, defender Isaac Donkor scored his first goal of the campaign for Cesena in their 4-2 victory over Pescara. There was no sign of Ransford Selasi on Pescara bench.

Bright Addae returned from suspension to play full throttle for Ascoli in their 1-1 stalemate against Virtus Entella.

Moses Odjer warmed the bench for Salernitana in their 1-1 draw with Perugia. Patrick Asmah was not added to the matchday squad.

Emmanuel Besea warmed the bench for Frosinone in their 2-0 win over Brescia.

Abdul Majeed Waris provided the winning assist for FC Lorient in their 2-1 win over Sochaux Montbilliard. Goalkeeper Lawrence Ati-Zigi warmed the bench for the losers.

Grejohn Kyei made a cameo appearance for Stade Reims in their 2-1 win at Niort.

Kevin-Prince Boateng lasted full minutes for Eintracht Frankfurt as they battled against Bayern Munich but lost 1-0 to the Bavarian giants. Young striker Okyere Wreidt warmed the bench for the Bayern.

Gideon Jung was enterprising for Hamburg in their goalless against VfL Wolfsburg at home.

Marcel Appiah excelled at the heart of the defence for VfL Osnabruck in their 2-0 win over Unterhaching.

AUSTRIA
Bernard Tekpetey was an unused substitute for Altach in their 1-0 home win over Austria Vienna. Kadiri Mohammed returned from suspension to play full throttle for the losers.

AZERBAIJAN
Richard Gadze played 90 minutes for Zira FK in their 1-0 win over Neftci Baku in the first leg of the Azerbaijan Cup quarter-finals.

William Owusu Acheampong was instrumental in Royal Antwerp in their 1-0 victory over Mouscron at home.

Nana Opoku Ampomah registered his name on the score sheet for Waasland-Beveren in their 3-1 win over Standard Liege.

Joseph Aidoo was in in his usual element for KRC Genk as they drew 1-1 with KAS Eupen, who are still searching for their first win under coach Claude Makelele after four games. Eric Ocansey was taken off in the 94th minute for Eupen. Goalkeeper Abdul Manaf Nurudeen was not included in the squad for Eupen.

Osah Bernardinho Tetteh made a cameo appearance for Westerlo in their 1-0 win over OHL Leuven.

Attacking midfielder Carlos Ohene lasted 57 minutes for Beroe in their 6-0 annihilation at CSKA-Sofia.

CROATIA
German-born Ghanaian attacker Reagy Ofosu was not included in Istra 1961 matchday squad as they were thumped 5-1 by league leaders Dinamo Zagreb.

Ahmed Said provided an assist, picked a booking before being substituted in the 87th minute as his side Hajduk Split recorded a 2-0 win over Lokomotive Zagreb.

Maxwell Boadu Acosty was substituted in the 55th minute for Rijeka in their 2-0 victory against Slaven Belupo.

DENMARK
Ibrahim Moro picked a booking but lasted full minutes of action for Silkeborg as they recorded a 2-1 win at OB Odense.

Kelvin Mensah warmed the bench for Brondby in their 2-2 stalemate with Aarhus at home.

Ernest Asante lasted 67 minutes for FC Nordsjaelland in their 3-2 win over Hobro at the Right to Dream Park. Ghanaian trio of Mumin Abdul, Collins Tanor and Godsway Donyoh missed the game through injuries.

HUNGARY
Joseph Paintsil played remarkably well for Ferencvarosi in their 2-0 win at Vasas.

NETHERLAND
Derrick Luckassen lasted 73 minutes for PSV Eindhoven as they were hammered 3-0 by Ajax at the Amsterdam Arena.

In the Eerste Divisie, Leroy Owusu played astonishingly well for Almere City in their 2-1 home win over De Graafschap.

POLAND
Aziz Tetteh finally made an appearance for Lech Poznan after warning them for so long in their previous matches as he came on at halftime in their 1-0 win over Cracovia.

PORTUGAL
Winger Ernest Ohemeng did not make Moreinrense squad that were beaten 2-1 at Rio Ave.

In the Segunda Liga, Osei Barnes lasted 67 minutes for Arouca in their 2-1 home win over Leixoes.

SWITZERLAND Raphael Dwamena was introduced in the 66th minute for FC Zurich in their 2-1 home loss to Luzern.

Kasim Nuhu enjoyed 90 minutes of action for Young Boys in their 1-1 draw with Grasshoppers.

In the Challenge League, defender Kwadwo Duah lasted full minutes as his side Winterthur suffered a 2-1 defeat to Xamax.

Bernard Morrison was not included in Orlando Pirates 1-1 draw with Amazulu at home. Young midfielder Samuel Darpoh played the last 10 minutes for the away side.

Mohammed Anas lasted full minutes for Free State Stars in their 3-0 defeat at Bloemfontein Celtic. Mumuni Abubakar was an unused substitute for the losers.

Razak Brimah was not included in Mamelodi Sundowns matchday squad as they pip Golden Arrows 1-0.

SAUDI ARABIA
Isaac Vorsah was a pillar in defense for Ohod in their 2-2 draw against Al Ahli SC.

SCOTLAND
Prince Buaben was combative at the heart of Hearts of Midlothian midfield in their 1-0 win over Motherwell.

SERBIA
Francis Kyeremeh lasted full throttle for Radnik FK in their 1-0 victory at Zemun on Saturday.

Abraham Frimpong played 90 minutes for action for Red Star Belgrade in their 3-0 win over Borac. Richmond Boakye Yiadom warmed the bench for the victors.

SLOVAKIA
Hans Nunoo Sarpei made a cameo appearance for Seneca FK in their 1-1 draw with Michalovce at home. Sadam Sulley lasted full minutes for the visitors.

TUNISIA
Nicholas Opoku was in great form for Club African in their goalless draw with Zarsiz.

John Boye returned from a long injury lay-off but was declared unfit to play as his side Sivasspor beat Istanbul Basaksehir 1-0. Joseph Attamah lasted 61 minutes for coach Abdullah Avci's side.

Asamoah Gyan was an unused substitute for Kayserispor in their 1-1 draw with Besiktas.

Emmanuel Agyemang Badu lasted 66 minutes for Bursaspor in their 1-0 loss to Fenerbahce. Kofi Atta did not make the matchday squad for the Green Crocodile.

Mahatma Otoo scored his EIGHT league goal for Balikesirspor as they held his former side Umraniyespor to a 2-2 stalemate.

TANZANIA
Former Liberty Professionals striker Bernard Arthur opened his account for Azam FC in a friendly game against Friends Rangers as part of their preparations ahead of next season.