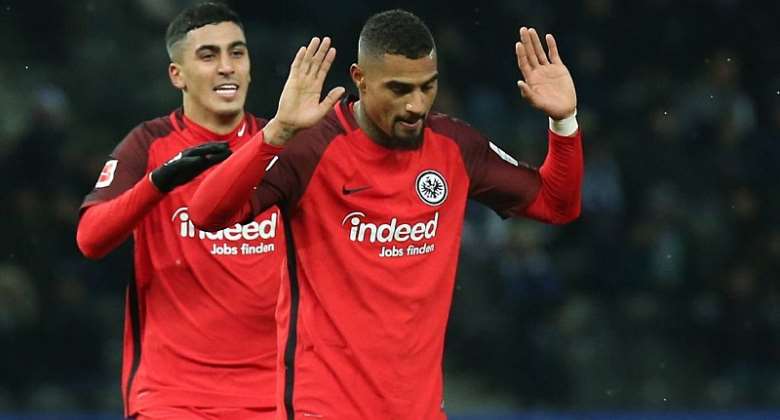 Ghana midfielder Kevin-Prince Boateng says he performance against ex-club Hertha Berlin was the weakest in his career but delighted to score to silence them.

The Eintracht Frankfurt ace hit a superb winning goal 10 minutes from time to seal 's 2-1 comeback victory at his ex-club in the Bundesliga on Sunday.

In falling snow at Berlin's Olympic Stadium, the 30-year-old Boateng unleashed a superb shot from the edge of the area to leave Hertha goalkeeper Rune Jarstein with no chance.

But the Berlin-born Frankfurt midfielder muted his celebrations having started his career at Hertha.

"It feels good to have won because we have an important game coming up against Bayern Munich," said Boateng with Frankfurt hosting the Bundesliga leaders next Saturday.

"Personally, that was perhaps the weakest performance of my career, so I am glad we won."

Boateng had to tread carefully in a bad-tempered game after picking up a yellow card with just nine minutes gone, but Frankfurt coach Niko Kovac, who played alongside Boateng for Hertha a decade ago, left him on.

"We talked about it during the break, but the coach knows I have enough experience to hold myself back a bit," explained Boateng.

The result lifted Frankfurt to eighth, while Hertha are 11th and five points from the relegation places.

It was a poor display from Hertha, who got off to a bright start when Australia striker Mathew Leckie put in a great pass over the Frankfurt defence which Davie Selke fired home on 15 minutes.

However, Marius Wolf hauled Frankfurt level by rifling his shot into the roof of the net from a corner on 26 minutes.

Boateng settled the matter on 80 minutes when he hammered a curling shot into the top left-hand corner for his third league goal of the season.

The half-brother of Germany star Jerome Boateng has played all 14 Bundesliga games for Eintracht since joining in August after a hurried departure for family reasons from Spanish club Las Palmas.

Boateng has played for AC Milan, Portsmouth, Tottenham Hotspur, Hertha and Schalke in a colourful career.

He made the last of his 15 appearances for Ghana at the 2014 World Cup but left the tournament under a dark cloud after a row with the coach.

Covid-19: Headache, body pains show the vaccine is working i...
14 minutes ago