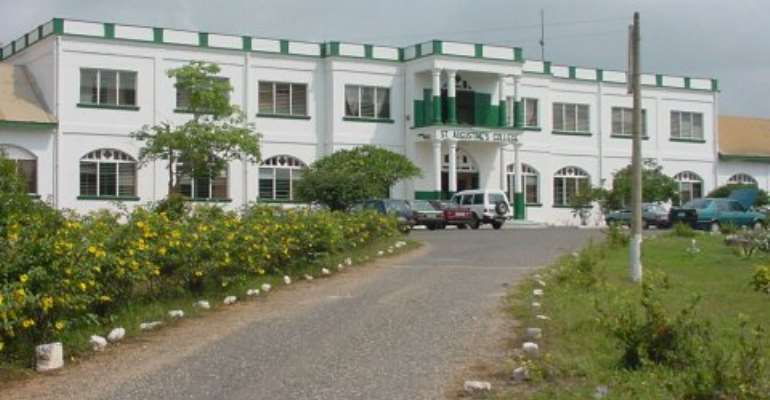 Cape Coast, May 3, GNA - An assistant accountant at the Saint Augustine's College in Cape Coast who allegedly connived with the school's principal accountant, now at large, to steal various sums of money amounting to 1.39 billion cedis from the school's coffers was on Tuesday remanded by a circuit court in Cape Coast.

Isaac Nana Asmah, who pleaded not guilty to forgery of documents, falsification, stealing and conspiracy to commit crime, would be re-arraigned on May 10.

Mrs Patience Klinogo, a Principal State Attorney, told the court that a team of auditors detected the theft during a routine audit exercise of the school's account from October 1 2003 to November 30 2004.

She said the Principal Accountant, Seth Tudah who is in the United States, allegedly connived with Asmah and forged the headmaster's signature that enabled them to withdraw large sums of monies from the school's accounts at the Agricultural Development (ADB) and the Ghana Commercial Banks (GCB) during the period.

She said at the ADB, between January and November 2004, 14 cheques amounting to 380 million cedis with the false signature of the headmaster were fraudulently inserted whiles seven cheques with a total amount of 176 million cedis was also inserted at the GCB. Mrs Klinogo said one cheque was also altered from six million to read 36 million cedis and that investigations revealed that the forged signatures were in Asmah's handwriting.

She said the accused persons prepared fictitious pay vouchers, store receipts and invoices and when the alleged suppliers were contacted during investigations, they all denied knowledge of the invoices.

The state attorney said as soon as the deal was uncovered the principal accountant bolted and has so far refunded 120 million cedis out of the amount.