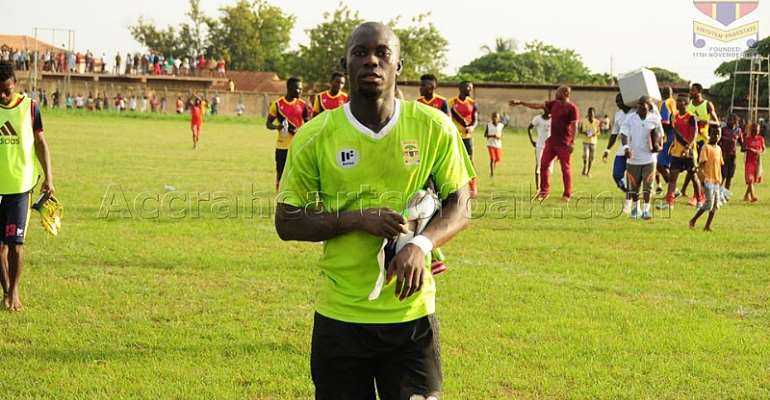 Accra Hearts of Oak goalkeeper Samuel Akurugu says he is happy to keep his fourth clean-sheet from five matches so far in the 2016 season.

Hearts kept a first clean-sheet in three home games in the 1-0 win over Sekondi Hasaacas, to make it back-to-back shut-outs in two games.

Goalkeeper Akurugu ensured another shut-out when he rushed out of his line to save Fatawu Mohammed from serious trouble after the youngster had undercooked a back pass for him, and made himself big to block out the angles for Hasaacas' Samuel Afful, before diving at full pelt to smother the danger.

Hearts had to ride their luck especially in the second half, and Akurugu was on hand to deny his former side when they breached the home defense.

The clean-sheet recorded against Hasaacas was Akurugu's third in four league games and fourth in all competitions for the Phobians.

'I am happy I kept a clean-sheet but I will give thanks to God; I will be happy if it continues like this till we reach our objective as a team,' the goalkeeper told facebook.com/ accraheartsofoak after the game.

'We are happy to get the victory [over Hasaacas]. The game was not easy but we are going to work on some of the mistakes before our next game and we hope we will have our supporters there.'