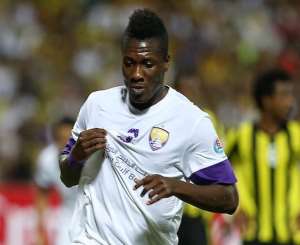 AUSTRIA
In the Austrian second-tier league, Ghana U20 goalkeeper Lawrence Ati-Zigi and midfielder David Atanga both played for Liefering when they thrashed Hartberg 4-1. Atanga assisted two of the goals while striker Frederick Adjei was unused by Liefering.

Elsewhere German-born Ghanaian defender Davidson Drobo-Ampem could not make the Wacker Innsbruck squad for their 1-0 win over Mattersburg.

BELGIUM
Young striker Eugene Ansah came off the bench to score a brace for KSC Lokeren when they posted a handsome 5-1 win over Mouscron-Péruwelz. He scored in the 83rd and 86th minutes after coming off the bench in the 78th minute. Belgian-born Denis Odoi played the entire game for Lokeren.

Suspended Micth Apau did not play for Westerlo when they lost 2-0 at KV Oostende.

Ghanaian pair of David Addy and Jerry Vandam were in full time action for Waasland-Beveren when they held Zulte-Waregem to a 2-2 draw.

Crocked Ghanaian midfielder Bennard Kumordzi was not in the KRC Genk side that suffered a 4-0 humiliation at KV Mechelen.

Winger Frank Acheampong played the entire minutes of the game for Anderlecht when Club Brugge defeated 2-1 on Sunday evening.

Nana Akwasi Asare was booked in the 34th minute and played the entire game for KAA Gent when they won 3-1 at Standard Liege.

In the second-tier league, Lommel United got beaten 1-0 by AS Eupen. Ghanaian midfielder Samuel Asamoah played 74 minutes for AS.

Abdul Yakinu-Iddi did not play for OH Leuven when they hammered Woluwe-Zaventem 7-0.

SWITZERLAND
Striker Samuel Afum was not in the Young Boys team that destroyed FC Thun 4-0.

Meanwhile at the Ghana attacker Ebenezer Assifuah played the last 27 minutes for FC Sion when they lost 1-0 against FC Basel.

Christian Astu could not make the Everton squad for their narrow 1-0 win over Burnley on Saturday.

In the Championship, Albert Adomah was in full time action for Middlesbrough who won 1-0 at Norwich City. Ghanaian-born midfielder Alexander Tettey scored an own-goal to gift Boro the win.

Youngster Koby Arthur returned to the Birmingham City squad but warmed the bench as they slipped to a 1-0 loss against Watford.

Former Arsenal starlet Zak Ansah was not in the Charlton Athletic squad that won 2-1 against Leeds United.

In the FA Cup, striker Kwesi Appiah was not in the Reading team when Arsenal defeated them 2-1 to reach the final.

FC Utrecht triumphed over FC Twente after beating 1-0. Dutch-born Ghanaian youngster Rodney Antwi returned to the Utrecht squad but was unused however midfielder Shadrach Eghan came off the bench to play for Twente.

Feyenoord a shock of their season when Go Ahead Eagles defeated them 1-0. Ghanaian attacker Elvis Manu played the entire game for Feyenoord.

In the Eerste Divisie, Marcel Appiah was in fine shape for NEC Nijmegen who beat Almere City 2-1.

Black Stars midfielder Rabiu Mohammed played till the 89th minute for Kuban Krasnodar as they held Zenith St Petersburg to a 0-0 draw.

Caleb Gomina could not make the Moreirense as Paços de Ferreira held them to a goalless draw.

Alhassan Wakaso and Emmanuel Okyere Boateng both played for Rio Ave who held Gil Vicente to a 0-0 draw.

Emmanuel Oti was in action for Sporting Braga II when they defeated Olhanense 1-0.

Osei Barnes was in action for União Madeira as Sporting CO II beat them 1-0.