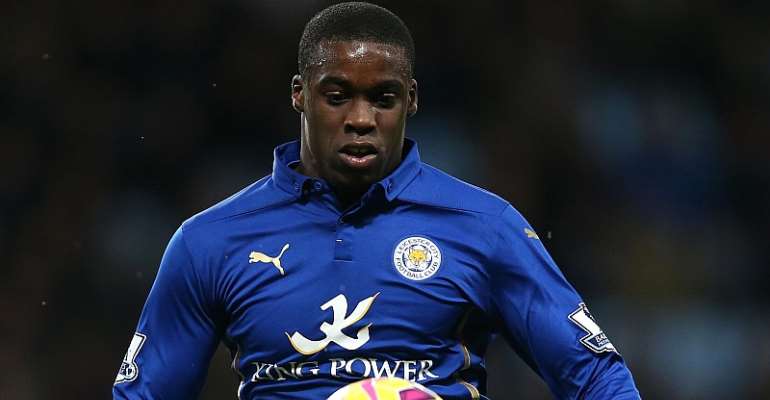 Black Stars wing-half Jeffrey Schlupp scored an own-goal as his Leicester City worked in vein in their 4-3 defeat against Tottenham Hotspur in the English Premier League on Saturday.

The 22-year-old diverted a ball into his own net in the 85th minute and David Nugent's last-gasp strike was not enough to save his bottom-placed side from the loss at the White Hart Lane.

Kane slotted home and scored with a deflected shot as Spurs went 2-0 up.

Leicester fought back and Jamie Vardy steered in a David Nugent cross before Wes Morgan headed in an equaliser.

Kane converted a penalty and Foxes defender Jeff Schlupp scored an own goal as Spurs, despite Nugent's late second strike, held on for victory.

Leicester remain bottom of the table but will feel aggrieved at a controversial penalty decision going against them as referee Mike Dean adjudged Nugent had fouled Danny Rose with the game poised at 2-2.

The Foxes again came away with nothing from a valiant display as they lost an 18th league game out of 29 this season.

Tottenham's credentials had been questioned following the way they wilted at Manchester United last Sunday and, even though they secured three points, they remain unconvincing with their vulnerable defence having let in 14 goals in their last six league games.

Nevertheless, the White Hart Lane side are three points off fourth-placed Manchester United, who play fifth-placed Liverpool on Sunday, and have Kane to thank for keeping their rivals within reach.

The striker put Spurs in front when he side-footed in from a yard out after Foxes keeper Kasper Schmeichel could only palm a flick from Eric Dier into his path.

Kane, called up to the England squad during the week, added his second with a shot which went in via a deflection off Foxes defender Robert Huth.

The home side should have been 3-0 up but Nacer Chadli fired over after Christian Eriksen's shot hit the post.

Leicester manager Nigel Pearson picked an attacking line-up, consisting of three strikers in Vardy, Nugent and Leonardo Ulloa and the move appeared to have backfired.

However, Vardy fired in following a cross from Nugent and Morgan headed in a corner as the visitors took two of the many chances they created to draw their side level.

Leicester were in the ascendancy before referee Dean ruled Nugent had fouled Rose, with Kane making no mistake from the spot as he sent Schmeichel the wrong way.

Schlupp's own goal after an Eriksen effort struck Schmeichel and bounced in off him looked to have put Tottenham out of reach but the visitors refused to give in.

Nugent scored an injury-time goal but Leicester did not have enough time to salvage something from the game.