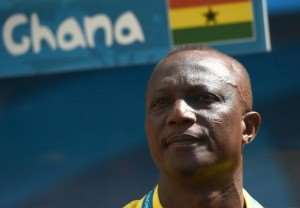 Ex-Ghana coach Kwesi Appiah is delighted to have made a successful switch from national team to club coach as his Sudanese club Al-Khartoum defeated Zambians Power Dynamos 1-0 in the CAF Confederation Cup.

Widely-travelled Niger striker Kamilou Daouda scored the winner for Khartoum midway through the first half after springing an offside trap in a lively preliminary round, first leg clash.

“I'm happy with the crucial victory and it's a good start,” Appiah told  Goal Ghana .

“I'm looking forward to a positive campaign.”
Appiah parted ways with Ghana as the coach last September after a two-year spell that produced mixed results and some problems off the field.

Under the 54-year-old, the Black Stars qualified for the World Cup but money problems dogged the campaign and they were eliminated after the first round.

But he is making the desired impact in Sudan where he has been signed to revive the side who have struggled recently.

Daouda, who has played in Niger, Cameroon, Libya, Tunisia and Algeria, was a constant threat and had the ball in the net a second time only to be ruled offside.

Khartoum, hoping to become the second Sudanese side after 1989 African Cup Winners' Cup champions El-Merrikh to lift a CAF trophy, would have won more convincingly but for Power goalkeeper Joel Kanyeba.