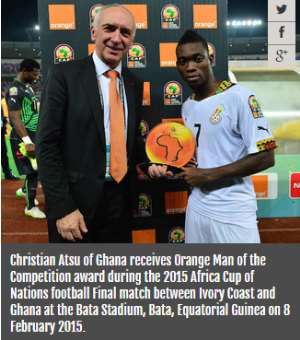 Ghana players swept the post-tournament awards for the 2015 Africa Cup of Nations Ghana despite not winning the title through the gamble of penalty kicks indicating that the Black Stars were truly outstanding and dominant in the competition in Equatorial Guinea.

The Ghanaians won four of the five awards for the tournament in display with Christian Atsu adjudged the best player of the competition as he won the MVP of the Orange Africa Cup of Nations Equatorial Guinea 2015.

It was double delight for Atsu, as his goal against Guinea at the semis was named the Nissan Goal of the Tournament.

He featured in all six games for the Black Stars also won the Nissan Goal of the Tournament after a stunning strike against Guinea in the quarter-final.

Also, Andre Ayew went away with the Pepsi Highest Scorer, for the player to have scored the most goals at the tournament.

Ayew scored thrice and provided the highest number of assists.

Nissan Goal of the Competition  Christian Atsu (against Guinea)