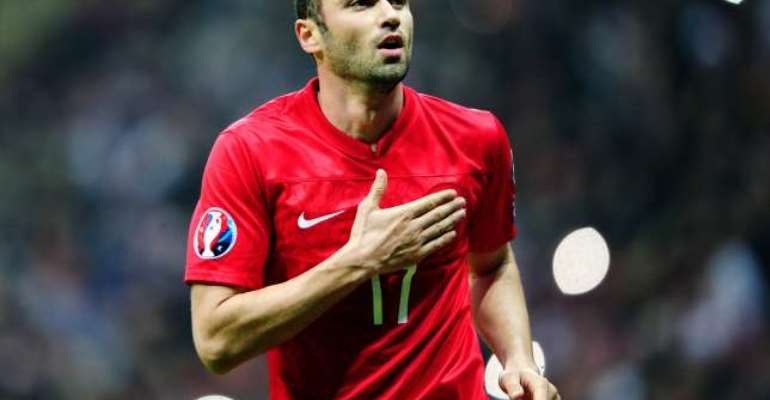 After seeing an early effort ruled out for offside in Istanbul, the Galatasaray frontman opened the scoring from the spot after 26 minutes, before forcing a mistake from visiting goalkeeper Alexandr Mokin.

Serdar Aziz stretched the advantage to three with a headed effort seven minutes from the final whistle, but there was still time for Samat Smakov to pull one back for the Kazakhs through a late penalty.

The result lifts Turkey to fourth in Group A, while Kazakhstan remain without a win.

Volkan Babacan came on as a half-time substitute in Turkey's 4-0 friendly defeat to Brazil on Wednesday, making one particularly impressive save from a David Luiz header shortly after his introduction, and was preferred between the sticks to the more experienced Volkan Demirel for the visit of Kazakhstan.

Babacan - winning just his third cap - had little to do in the opening stages, though, as the home side made the early running.

Burak had the ball in the back of the net in the seventh minute, but had already been flagged for offside and was somewhat harshly booked for applying the finish.

Half-hearted appeals for a penalty went unrewarded when Arda Turan was brought down by Renat Abdulin in the Kazakh box after 20 minutes, and replays suggested the hosts may have been hard done by.

Burak should have done better when he fired wide unmarked soon after, but made up for that error by converting from the penalty spot after being felled by Abdulin.

And the 29-year-old doubled the advantage with a drilled effort from the edge of the box three minutes later, with goalkeeper Mokin letting the ball slip through his fingers.

Aziz's glancing header from a corner in the 83rd minute made sure of the points, but Smakov pulled one level four minutes later after Ulan Konysbaev was bundled over by Mehmet Topal in the box.

Arda was booked for diving as he looked to force the referee into awarding a third penalty of the match, before Aleksey Shchetkin tested Babacan with a low header at the other end to no avail.