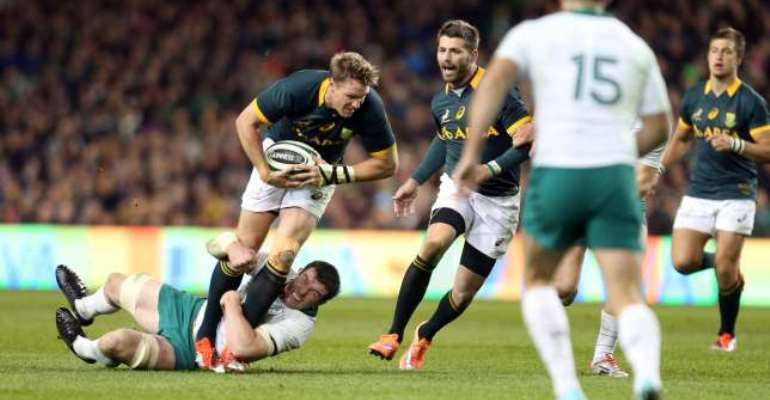 Ireland claimed their first win over the Springboks in five years on Saturday thanks in part to 16 points from the boot of fly-half Tommy Sexton, while flanker Rhys Ruddock and winger Tommy Bowe crossed for tries in an impressive victory for the Six Nations champions.

But South Africa captain De Villiers was left to rue a collection of poor individual performances that he felt was the primary reason for their defeat.

He told RTE Sport: "We made a lot of errors. Our first phases were actually very good, I thought we dominated the scrums and the lineouts and unfortunately, you can't play rugby without the ball. In the first half we hardly saw the ball.

"Credit to a good offensive system, Ireland definitely deserved this win tonight. I thought our senior players let us down a little bit tonight, including myself. We need to take a hard look at ourselves come back on Monday and work hard.

"I don't think there was [complacency] but then again looking at this result and the way we played maybe it did creep in at some stages."

For Ireland coach Joe Schmidt, the result represented progress from last year's clash with New Zealand, when his side were denied a famous triumph by an after-the-siren try from Ryan Crotty.

South Africa appeared poised to mount a comeback when George Coetzee's 57th-minute try narrowed the gap to 13-10 but a strong second-half showing ensured that JP Pietersen's late score was in vain.

"Probably, the first reflection I have is that South Africa scored approximately the same time as New Zealand did last year and we want to be known as a team who goes 85 minutes," Schmidt said.

"Fatigue, after trying to keep such a big team out puts pressure on. It certainly atones for the feeling we had at the end of Guinness Series last season.

"I'm delighted with the performance, I don't think you can ask for too much more from a courage perspective. I think that there's a number of players who really stood up physically to a really tough assignment."