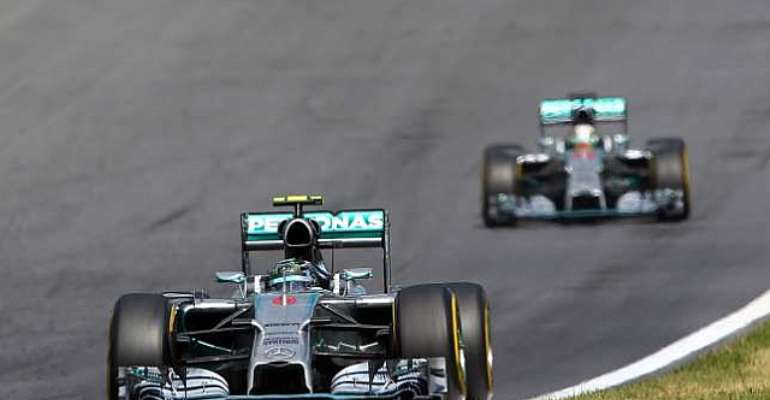 Having claimed victory in all but one race this season, Mercedes are well ahead of the rest in the constructors' championship, and appear poised to extend their advantage after a strong first session.

Drivers' championship leader Nico Rosberg topped the timesheets with a mark of one minute and 35.424 seconds, finishing ahead of Brit Lewis Hamilton (1:36.155secs), who will be hoping to cut the 29-point gap to his German team-mate at his home grand prix.

Much of the attention prior to the session was focused on Williams development driver Susie Wolff as she became the first woman to take part in a grand prix weekend for 22 years on Friday.

However, Wolff's involvement was ended after just four laps, the Scot setting a time of 1:44.212secs before her car ground to a halt due to oil pressure problems.

That proved to be just the start of a bad session for Williams, Felipe Massa crashing out of practice as he was sent spinning into the wall after misjudging a corner.

Williams will still be expected to challenge this weekend after finishing third and fourth at the Austrian Grand Prix.

But Ferrari showed that they have the pace to be in the running behind Mercedes as Fernando Alonso (1:36.263secs) and Kimi Raikkonen (1:36.703secs) took third and fifth respectively.

McLaren's Jenson Button (1:36.963secs) ended the session in seventh, with team-mate Kevin Magnussen rounding off the top 10 behind the Toro Rossos of Daniil Kyvat and Jean-Eric Vergne.

Ethiopia says army in control of Tigray capital as more rock...
43 minutes ago