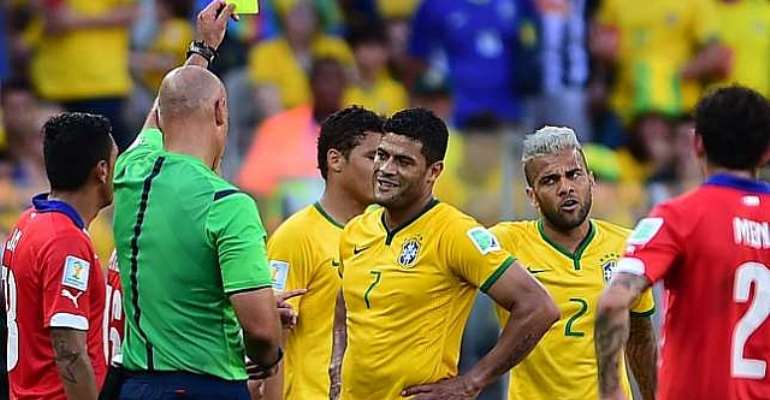 Brazil triumphed 3-2 in a penalty shootout in their round of 16 match against Chile in Belo Horizonte with Neymar scoring with the hosts' last spot kick before Gonzalo Jara missed the decisive penalty.

But despite seeing Brazil move into the last eight of the World Cup, Scolari reserved some criticism for referee Howard Webb at his post-match press conference, claiming the home side had been unfairly denied a penalty and a second-half goal.

Webb ignored Hulk's claims for a penalty in the 13th minute, while the Brazilian forward also had a goal ruled out 10 minutes after the break for using his arm to control the ball.

The World Cup began in controversy when Brazil were awarded a match-winning penalty on the opening day of the tournament in their 3-1 victory over Croatia, where striker Fred was widely considered to have dived.

In the lead-up to Saturday's game in Belo Horizonte, Chile striker Alexis Sanchez had stated "my worry is the referee", indicating that Brazil might receive some advantage in front of their parochial home crowd.

The fact Webb denied Brazil both a penalty and a goal might suggest Sanchez's comments got to the English referee but although Chile defender Mauricio Isla made slight contact with Hulk in the penalty area, replays suggest it would have been a very soft penalty.

And the Zenit St Petersburg striker definitely used his arm to control an aerial pass in the 55th minute, before tucking his shot into the net.

But Scolari was not impressed.
"If you don't want us to be champions, OK but it must be the same for everyone," the 65-year-old said.

"My players are a little tense with everything that is going on. Everyone has been saying - coaches, players - that it's always Brazil that's wrong.

"That's not true. Some errors and doubts and controversial issue regarding penalties and hand balls, everybody is mentioning that. It's not always for Brazil, right?"

Scolari added that he had run out of patience with opposition teams, after Chile's substitutes and coaching staff regularly advanced beyond their technical area at the Estadio Governador Magalhaes Pinto.

"We are being very cordial, very nice and polite to the foreign teams. But perhaps it's time for us to change," Brazil's coach said.

"They were almost encroaching into our area. It was almost like war, they were waging a battle. I can't hold it in; I can't be polite anymore."

Brazil will take on Colombia in the quarter-finals on Friday in Fortaleza.