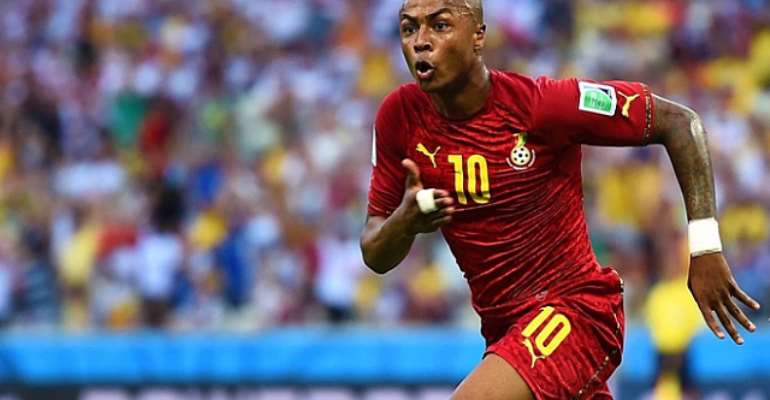 The locals are right. The Europeans are not having it their own way at this World Cup.

Europe's finest, the Germans of all people, were tested to the limits by a determined, ambitious Ghana here, who matched them goal for goal, strike for strike. This was another upset in what is turning into the World Cup of upended expectation.

It was billed as the Battle of the Brothers, the match between the Boateng siblings. But after a 45 minute phoney war, it only sparked into life when the pair had been substituted around half-time. After Ghana's Kevin Prince joined his hobbling German brother Jerome on the sidelines, a game which had been steeped in caution exploded. In 20 second half minutes, the teams traded four goals.

The first came on 51 minutes when Mario Götze stooped in on Thomas Müller's cross to open things for Germany. Then Andre Ayew climbed above the German defence to connect with Harrison Afful's searching cross and flick a delightful header past Manuel Neuer. Seconds later, Asamoah Gyan, the man prevented by Luis Suarez's cunning handball from taking his country to the semi-final in South Africa, was not to be denied here. Philipp Lahm, suffering an uncharacteristically faltering game in possession, gave the ball away in midfield. Striding in to snatch control, Milan's Sulley Muntari played a brilliant ball through to Gyan who burst on to slam home past Neuer. It was a delightful goal, followed by an uninhibited team shuffle down by the corner flag. For a moment, it promised so much for the Africans. But these were the Germans the Ghanaians were facing. And just two minutes after coming on the pitch, Miroslav Klose equalised, stabbing home Benedict Hoewdes' flick from a Toni Kroos corner. It was the 36-year-old's 15th goal at World Cup finals, putting him level with Brazil's Ronaldo as the most prolific striker of all time.

Ronaldo was quick to tweet his congratulations about the record having previously said: “Please cast a tiny spell on Klose. That would be good, so that Klose scores no goals here. I will pray with all my powers that he does not break the record.”

Joachim Löw, the German coach, said: “That was sheer drama, that was tension, that was excitement. There was an unconditional striving for victory. The spectator can imagine nothing better. For the coach, it is just the same, up and down on the seesaw.”

What a seesaw ride this was. Which was largely down to Ghana's unyielding endeavour. Whatever the problems they may be encountering behind the scenes (there is talk of a dispute over lack of payment) Ghana did not play like a team looking for an early departure. What an improvement they made from their woeful opening showing against the USA. Backed by most of the neutrals in the stadium, in heat more akin to Accra than Augsburg, from the early stages they matched Germany in every department. In the first half, of the goalkeepers, it was Neuer who was obliged to do more work, saving well from the ceaseless Muntari and obliged to come racing off his line to block a charge by Gyan.

“The Germans have a very good team,” said the Ghana coach Akwasi Appiah. “Saying that I believe in my players, there was no way I was going to sit back to let them attack me. I always believe the best form of defence is attack.”

And attack they did. The Germans, though, are not easily cowed, by conditions, circumstance or sibling rivalry. Or indeed by a determined opponent. They have lost only one of their last 19 games in group stages of the World Cup. Here, they fielded the same team as had eviscerated Portugal. Which meant it included six Bayern Munich players (and two from Arsenal). Familiarity in each other's play was evident in the fluidity of their passing.

This, though, was Germany's problem: the Ghanaians were not to be brushed aside. Keeping their shape, maintaining their pressing game, they looked to be Africa's most effective representative. How they will miss Muntari, who was utterly unyielding in front of his defence, after he received his second yellow card of the tournament.

Even after his caution, Muntari, though, did not stop working. And the breathless tempo was maintained to the last. More goals could have followed the second half rush, with Mohammed Rabiu desperately scooping the ball off Klose's toe as he was about to shoot and Fatawa Duada twice obliged to launch himself at low threatening crosses into his box. Neuer too was required to save athletically from Gyan and the substitute Jordan Ayew.

In the end, justice was done, Ghana had survived. And in this World Cup reputation continues to count for little.