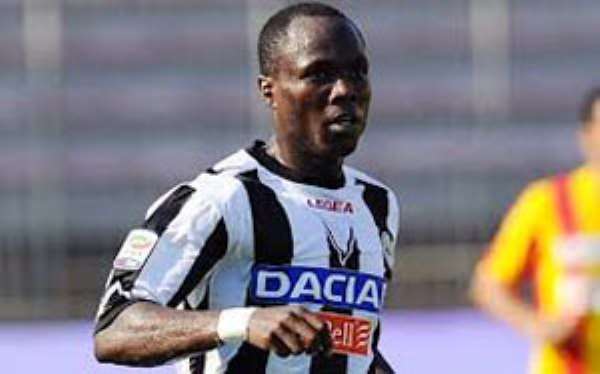 Ghana midfielder Emmanuel Agyemang-Badu has been slapped with a two-match ban for his sending off in Tuesday's Coppa Italia defeat at Fiorentina but he is eligible to play in the Serie A for Udinese this weekend.

The in-form Udinese man was flashed the red card on the bench for dissent during their 2-0 reverse.

Badu was seen directed off the pitch by the fourth referee after an alteration and expression of unhappiness with a decision by the match official.

The Disciplinary Commission gave its verdict today (Thursday) after the second legs of the Coppa Italia semi-finals.

Badu's absence will be a huge blow for Udinese due to his recent purple patch of form.

The 23-year-old has scored three goals in 16 appearances for Les Zebrettes.

However head coach Francesco Guidolin could still select the ball-battling midfielder for their upcoming Serie A clashes with Genoa and Atalanta.

Badu has recently been linked with English giants Liverpool, Arsenal and Tottenham Hotspur.