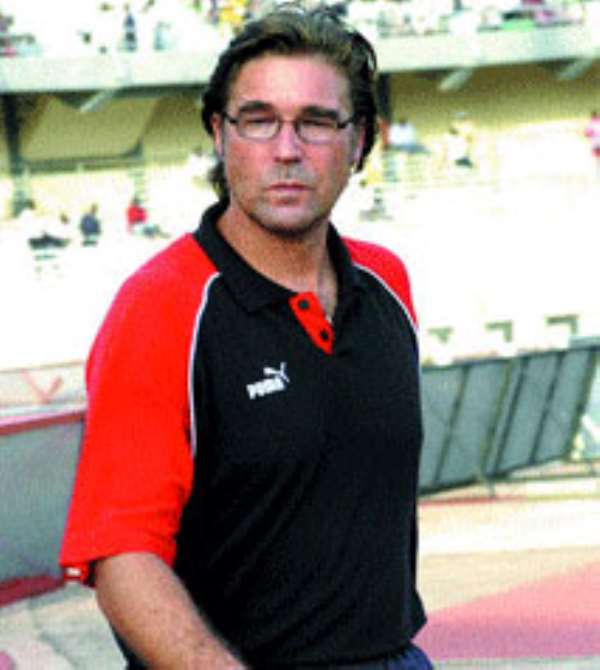 …Contract talks inconclusive The Ministry of Youth, Education and Sports and the Ghana Football Association are engaged in high level talks with stand-in national teams coach, Ralf Zumdick over his contractual relationship with Ghana football.

The FA, represented at the meetings by Chairman Ben Koufie and Chief Scribe Kofi Nsiah, and the Ministry, also represented by Deputy Minister Mr. Joe Aggrey and Minister of State in charge of Youth, Education and Sports, Rashid Bawa, according to Soccer Express sources, are intent on giving Zumdick a more stable contract than the three month initial assignment they offered him. That term runs out at the end of this month while other mouth watering invitations threaten to whisk the German away without job security.

FA scribe Kofi Nsiah yesterday told the Soccer Express that the discussions, started on Monday, is not conclusive yet and will continue today. "We have not arrived at anything yet but we met him yesterday, we met today and we are meeting him again tomorrow" in response to whether the coach is keen on taking the job.

He said all the parties are putting their cards on the table and was hopeful that at the end of it all something meaningful would be arrived at.

The Management Board of the FA first appointed Zumdick on September 9 as head coach of the national senior soccer team, the Black Stars and later all the national teams for three months while another coach was sought for a more permanent appointment, but his work rate and relative success at the Black Meteors and the Black Stars led to public clamour for his confirmation as the substantive coach.

But whiles at his new job, tempting offers are said to be pouring in from his native Germany at both club and national levels, giving him little space to decide where he wants to work.