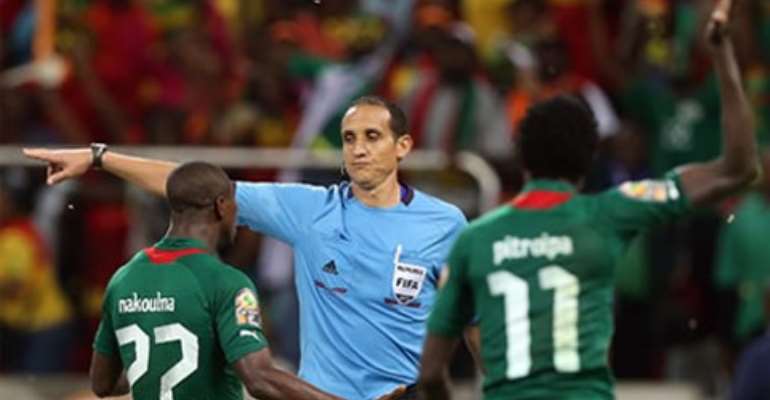 Tunisian referee Slim Jdidi has been banned by the Confederation of African Football (CAF) after his controversial performance in Wednesday's African Nations Cup semi-final between Burkina Faso and Ghana.

"CAF was not happy with the standard of refereeing in the match," general secretary Hicham El Amrani told a media briefing on Thursday.

"We know they can make mistakes but we expected a better level of refereeing. They are graded on each performance and based on his marks the referee from Tunisia is now suspended for a period of time still to be determined."

Among the contentious issues during Wednesday's match in Nelspruit was the red card given to Burkina Faso forward Jonathan Pitroipa that could mean he will miss Sunday's final against Nigeria.

Pitroipa received his second booking of the game, for simulation, in extra time after going down in the penalty area.

The organising committee will decide on Friday whether the player can take part in the final.

Burkina Faso have launched an appeal but El Amrani said the only way Pitroipa could avoid an automatic one-match ban will be if Jdidi acknowledges he made a mistake in his referee's report.

"The organising committee does not have the power to change a referee's decision," El Amrani explained.

"If the referee has admitted a mistake in his report the committee will consider it and make any decision if necessary. But that report ... is final."

Jdidi also awarded a soft spot kick to Ghana in a display which threatened to overshadow an exciting encounter that Burkina Faso eventually won 3-2 on penalties.