“YOU ARE A DANGER…” Man of God Yells At Adakabre 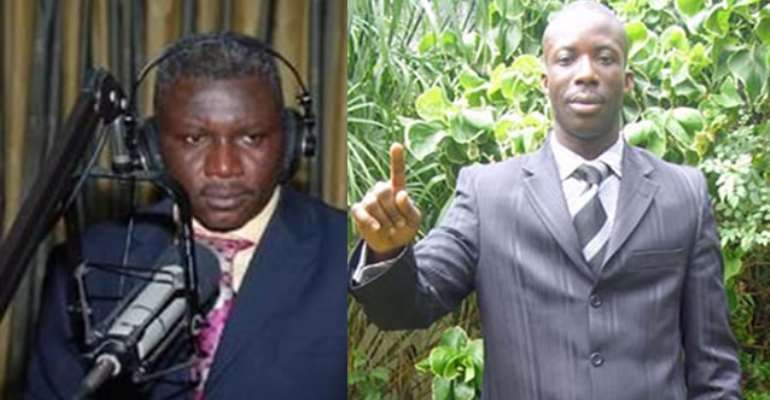 Thursday the 5th of April 2012 would forever remain a day controversial ace Broadcaster and morning show host of Tema based Adom Fm, Mr. Kwabena Adakabre Frimpong Manso will want to quickly forget about.

It was the second time within a month this year, that this dodgy personality, called Adakabre, also known as Mahamoud, cloaked with tomfoolery had his true nature revealed to the listeners of Adom Fm and the generality of Ghanaians by a Kumasi-based man of God, Prophet Nicholas Osei alias Kumchacha.

Adakabre Frimpong Manso was humiliated by the man of God, when his plot to set up the Prophet and the renowned Akomadan-based fetish priest, Nana Kwaku Bonsam, to a show of spiritual dexterity failed to come off.

The man of God last Thursday morning told Adakabre Frimpong Manso in the face that “you are a danger to society; I expect you as a fine journalist, and I hear you are also a lawyer, to know better, to promote peaceful co-existence rather than fanning useless and unnecessary tensions and face-offs”.

“Were you expecting me to follow you in your reckless adventurism by appearing on your station in Tema, Community two, to 'fight' Nana Kwaku Bonsam,” he queried, probing further, “what if I harmed him or he eventually injures me; who do you think will be responsible? It's you and that is why I made a fool of you.” An obvious reason why he did not turn-out for the contest.

Prophet Nicholas Osei told a bemused Adakabre that he had closely observed his penchant to pitch people on his programme to unnecessary square-off to his delight even if it will cause them pain later, and went on to cite three recent examples of what he termed Frimpong Manso's thoughtlessness.

“Adakabre, you are fond of doing these things and I think it is about time you stopped stoking tensions and quarrels whiles you sit back to enjoy. You did it to Pastor Love and wife, which eventually led to the break-up of their marriage. And you did it to Kennedy Agyapong, Koku Anyidoho and Mugabe, a radio presenter in London whom eventually you had to go on your knees to beg,” the fuming Prophet Nicholas Osei charged the man sitting behind the console in the studios of Adom Fm that fateful Thursday morning.

When Adakabre Frimpong Manso attempted to join Adom Fm and the production crew as being responsible and therefore the subject of the man of God's attacks, Prophet Kumchacha cut in to tell him: “It's you I am attacking; don't draw in Adom Fm or anyone else; it is you I am blaming and that has been your stock in trade. Leave Adom Fm alone, no wonder some people planned to demonstrate for your removal”.

Earlier on Wednesday morning and on the same station, Adakabre, applying his traits, succeeded in luring the two, Prophet Nicholas Osei and Nana Kwaku Bonsam into a rumba.

This obviously did not go down well with Prophet Kumchacha, a close friend and spokesperson of Prophet Nana Kofi Yirenkyi, who called into the show to accuse the self-acclaimed Nana Bonsam of employing mendacity to rekindle his waning attractiveness.

He said the release of his pal from prison was the sole handiwork of God after intercessory prayers from Christians and not by the power of any deity or gods.

Capitalizing on the heated back-and-forth from the man of God and the fetish priest, and invoking what he knows how to do best, Adakabre Frimpong Manso succeeded in getting the men to instinctively accept a challenge to a spiritual contest at the same station later the same day.

The show however failed to come-off and the large crowd that had besieged Adom Fm radio station in anticipation of the showdown finally left in disappointment.

This is the second time within a month Adakabre Frimpong Manso has been exposed to the general public, for what he really is, on his own radio show.

Sammy Awuku had chided Adakabre for generating unnecessary tension between politicians and among the populace, by unprofessionally inciting political activists to have a go at each other, without provocation.

The abusive NPP Member of Parliament (MP) for Assin North, Kennedy Agyepong, who has had several controversial interviews with Adakabre Frimpong Manso, also rather than attacking NDC actors, including his latest target, President J.E.A Mills, uncharacteristically turned his guns on the host, Adakabre, for always setting up people he invited to speak on the morning show.