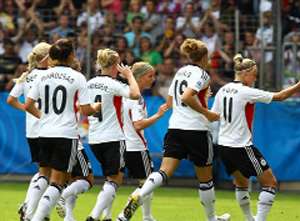 Germany became the first host nation to lift the FIFA U-20 Women's World Cup as an early goal from their penalty-box princess, Alexandra Popp, and a late own goal earned them a 2-0 victory over Nigeria.

It was Popp's 10th goal of the tournament and means she wins the Adidas Golden Shoe for top markswoman at Germany 2010 while also becoming joint top scorer in all five editions.

It is the second time Germany have lifted this crown - they were also champions in Thailand in 2004 - and it was fully deserved as they wrapped up their sixth successive victory.

While Nigeria were wonderfully spirited and never gave up, the home team should have made it easier for the capacity crowd in Bielefeld with a second goal before finally they put the issue beyond doubt in injury time.

Germany have made a habit of scoring early goals in this tournament and they made sure the final was no exception. In the eighth minute the ball was hit long and high from the right-back position and Popp flicked it on.

Dzsenifer Marozsan, standing behind her, cushioned the ball before feeding a simple square pass for Germany's prolific number 11 to run onto.

Her surge took her past Joy Jegede and a shot towards the far corner comfortably beat goalkeeper Alaba Jonathan.

Germany were almost gifted a second goal to take into half-time when Jonathan kicked the ball straight to Sylvia Arnold who shot towards the left-hand corner. The keeper made amends with the save.

Nigeria continued in the same vein, winning some vital midfield challenges and forcing Germany back with their strength. Yet it was the home side who had the best openings.

Germany remained in charge: Marina Hegering firing too high while Huth's shot forced a fingertip save and substitute Stefanie Mirlach demanded that Jonathan push this one over the top.

The game finished with Germany well on top, Kulig scuffing a shot against the post.

Then in added time the home side forced two corners and from the second Kulig headed powerfully towards goal.

It came back off the post and unfortunately for Osinachi Ohale it hit her on the back before crossing the line.