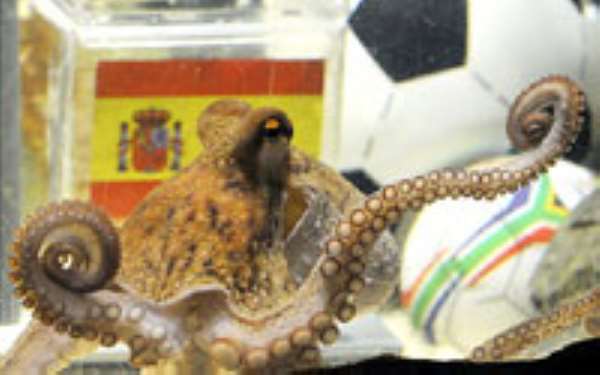 With Kofi Owusu Aduonum
Octopus Paul
Paul the octopus, who became a pop culture sensation by correctly predicting the outcome of as many World Cup matches as he has legs — all seven of Germany's games plus the Spain-Netherlands final— is going to retire,.

The intuitive invertebrate will 'step back from the official oracle business,' Tanja Munzig, a spokeswoman for the Sea Life aquarium in Oberhausen, told AP Television News. 'He won't give any more oracle predictions—either in football, nor in politics, lifestyle or economy,' she said. 'Paul will get back to his former job, namely making children laugh.'

However, Paul took one last curtain call on Monday. Aquarium employees presented the octopus with a golden cup—similar to the official World Cup trophy. Although the cup was garnished with three mussels, Paul ignored it for several minutes as it was lowered into his tank. He finally picked off one mussel and devoured it in front of television cameras.

Paul won worldwide attention as he called all of Germany's games correctly— including its semifinal defeat by Spain. He crowned his career by forecasting correctly that Spain would beat Holland in Sunday's final.

Involve chiefs in galamsey fight – Otumfuo to govt
1 hour ago