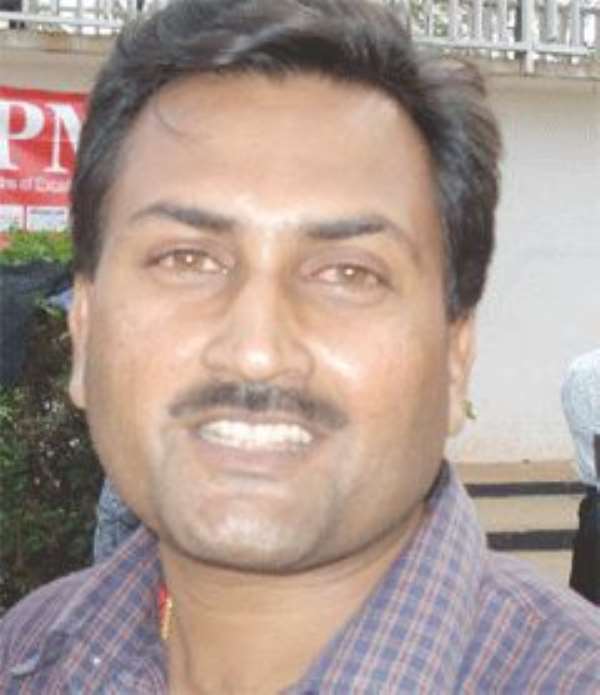 The national cricket team began their ICC Africa World Division III campaign on a positive note with a seven-wicket win over Swaziland in their opening match played at the main oval of the Willowmore Park Cricket Stadium.

The win last Sunday was facilitated by James Vifah a.k.a Sokpo, who was at the end adjudged Man of the Match, scoring an incredible 109 runs.


By this victory, the team has brightened its chance of picking up one of the two places in next November's ICC (International Cricket Council) Africa Division Two Tournament to be staged in Zambia.


The Swazi's won the toss and opted to bat and Ghana's wicket keeper Rufus Ntiamoah, caught the first batsman out after a fast bowl by Abdul Karim Sumaila. Swaziland's batsmen found it diffiucult to score a high run rate because of the good fiedling on the part of the Ghanaians.


But with the introduction of Adrisbhal Patel, Swaziland's run rate shot up considerably as he batted many fours and sixes. Patel was, however, caught out in the 41st over by James Vifah and this slowed down Swaziland.

At the end of their innings, however, Swaziland had scored 197 runs for 9 wickets in 50 overs.


In the second innings, Ghana's opening batsmen Francis Dake and Simon Ateak were all bowled out by the 15th over, and James Vifah and Lawrence Ateak came on to maintain the run rate of 6.5 per over and held the fort until Ghana scored 190 runs.


Vifah was caught out in the 32nd over but this did little to stop Ghana from winning the game two overs later after scoring 199 runs for three wickets.


In an interview after the match, Coach Bhupinder Brar said the fact that Swaziland were the least rated team in the tournament made it a must for Ghana to win.

"We did perform well even though our batting still needs a lot of polishing. We have been seeded together with Sierra Leone in this tournament so the least our two sides can do is to reach the final and qualify for the Assoiciate tournament," he said.


In other Pool B matches, an invitational team from the Easterns Club, that replaced Morocco, defeated The Gambia by 126 runs.

In Pool A, highly ranked Sierra Leone gave Lesotho a bitter taste of their devastating form winning by 71 runs while Rwanda defeated Malawi.

Ghana can book a place in the semi-final by winning their next game against The Gambia.


The national team's participation in the tournament was made possible with support from IPMC, RAV Solutions, B5 Plus, Poly Group, Neha Cvinco Foods, Ghana Commercial Bank and Voltic Mineral Water.


Menahwile Mr Ravinder Vyas, one of the team's sponsor's who is also in South Africa has promised to host the team to a special dinner if they qualify for the semi finals.

"We have to do everything possible to make the boys happy so they can play and win. We came here to win so we will also do our best to moitivate the boys to perfrom," he told this paper after Ghana's win last Sunday.