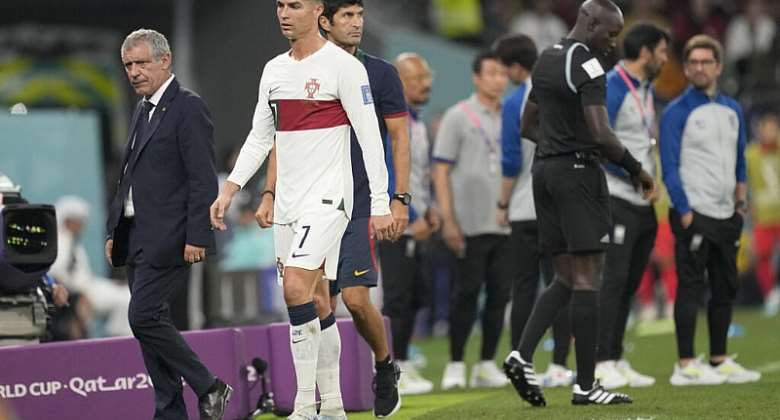 Portugal could start their last-16 game against Switzerland on Tuesday night with Cristiano Ronaldo stripped of the captain's armband or not even in the starting line-up following his angry reaction to being replaced midway through the second-half of the final pool game against South Korea.

"I didn't like it, not at all," said Portugal boss Fernando Santos on the eve of Portugal's clash at the Lusail Stadium.

"I really didn't like it but we fixed that in-house and that's it.

“I only decide who's going to be the captain when I reach the stadium."

Portugal are attempting to reach the quarter-final for the first time since 2006.

Feat
Ronaldo played in that campaign in Germany where they eventually finished fourth.

When he scored in the opening Group H game against Ghana on 23 November, Ronaldo became the first player to score at five World Cup tournaments.

Bruno Fernandes claimed both in the 2-0 win over Uruguay and Ricardo Horta scored the opener in the 2-1 loss to South Korea on 2 December when Ronaldo threw his tantrum.

A poll in Portugal suggested fans no longer want the 37-year-old in the national team.

Challenge
Questions over Ronaldo's status are unlikely to ruffle the Swiss who have not reached the last eight since 1954.

"It is a big opportunity for us to make history for Switzerland," said coach Murat Yakin.

"We have seen how euphoric the Swiss people are about being at this stage of the competition."

Portugal and Switzerland met in the Uefa Nations League in June. Switlzerland lost 4-0 in Lisbon but won 1-0 in Geneva.

"We would love to give our fans at least one more game to enjoy, added Yakin. “We've proven that we're able to beat Portugal.”

Stage
The winner will play either Morocco or Spain on Saturday evening at the Al Thumama Stadium. They clash at the Education City Stadium.

Morocco, who topped Group F with a draw against Croatia, followed by wins over Belgium and Canada, have never advanced to the last eight.

“Everyone wants to come to Doha,” said Morocco boss Hoalid Regragui. “We could fill two stadiums with our fans.

"We're going to give it our all and we don't want to leave the competition with any regrets."

Fortunes
Spain launched their campaign with a 7-0 demolition of Costa Rica. That was followed by a 1-1 draw with Germany.

During their 2-1 loss to Japan in the final game of Group E on 1 December, they were out of the competition for around five minutes after Costa Rica took a 2-1 lead over Germany.

The Germans fought back to win 4-2 and restore Spain.

“Luckily, that defeat has been resolved and we are clear about what we have to do,” said Spain midfielder Gavi.

“We are in the round of 16 and there are some very good teams that haven't been able to do it. That's why we have to really think that this  pressure is a privilege."