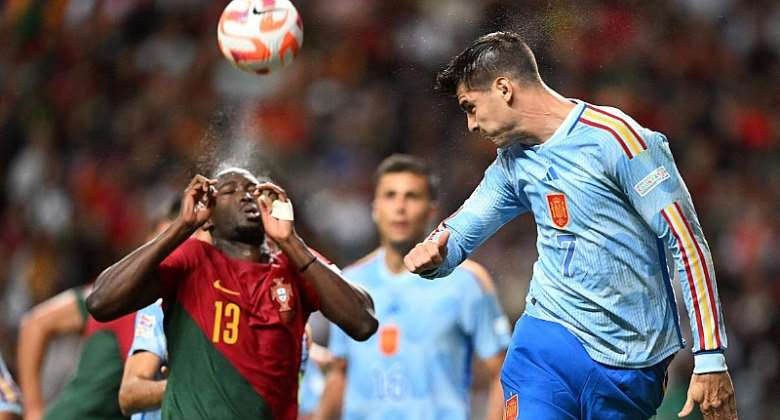 Spain have secured their place in the final four of the Nations League with a dramatic 1-0 win against Portugal at the Estadio Municipal de Braga.

Having succumbed to a surprise 2-1 defeat to Switzerland at the weekend, Spain arrived in Braga knowing that they would need to take all three points to go through to next summer’s finals. Portugal, who went two points clear at the summit following their 4-0 demolition of the Czech Republic on Saturday, could afford to settle for a draw.

Fernando Santos, the Portugal manager, tweaked his starting line-up, with Joao Cancelo returning from suspension to replace Diogo Dalot – who notably scored twice against the Czechs – while Nuno Mendes and Diogo Jota came in for Mario Rui and Rafael Leao respectively. Luis Enrique, by contrast, made wholesale changes, swapping in seven players in total including an entirely different midfield three of Koke, Rodri and Carlos Soler.

Spain dominated the ball early on, but were left with little to show for it other than a shot from Pablo Sarabia which was blocked by Danilo Pereira. Portugal, who were content to cede the lion’s share of possession to their opponents, had the better chances in the first half, with Ruben Neves stinging Unai Simon’s palms from distance, Jota forcing the Spain goalkeeper to tip a shot over the crossbar and Bruno Fernandes unleashing a fierce drive from distance which looked to be sailing into the top corner only to ripple the side netting.

The hosts picked up where they had left off after the break, Jota scampering forwards on the left before threading through Cristiano Ronaldo. Simon rushed off his line, made himself big and pulled off a fantastic one-on-one save.

Ronaldo looked certain to score with a little under 20 minutes on the clock when Jota found him completely unmarked. Jose Gaya spotted the danger, however, and sprinted back to nick the ball off his toe.

Spain pressed hard for a winner late on, Alvaro Morata curling a shot towards the bottom corner from distance which Portugal keeper Diogo Costa did well to push round the post. It looked like it would all be in vain but, with two minutes of normal time to play, substitute Nico Williams nodded across goal and found Morata, who lashed into the back of the net to write himself into Iberian football folklore.