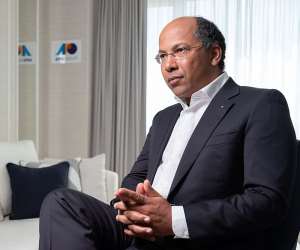 The Founder and Chairman of APO Group, Nicolas Pompigne-Mognard sees a lot of prospects for basketball in Ghana.

To grow the sport in the West African country, the APO Group chairman has advised that the local federation focuses on the grassroots to tap into the talents of young boys and girls with an interest in the sport.

“The most important indicator of growing the game in Ghana is to work with the local federation to lead and develop grassroots initiatives such as training camps for boys and girls, coaches clinics, and building infrastructure. There must be a lot of groundwork at the base before moving up the pyramid. Basketball in Ghana has strong prospects,” Nicolas Pompigne-Mognard advised in an interview with Modernghana Sports.

Over the years, there have been efforts to grow basketball in Ghana but it has not quite achieved the desired results.

Despite competition in Senior High Schools and Universities, the interest in the sport remains relatively low.

Due to the lack of support to grow and develop the sport, young people are unable to stick to playing basketball as a profession in the country.

According to Nicolas Pompigne-Mognard, Basketball in Ghana has a lot of prospects and will grow if the local federations regularly organised training camps for young people.

In his engagement with Modernghana Sports, he disclosed that Basketball Africa League (BAL) Ambassador Pops Mensah-Bonsu is set to organise one of such camps in the country in August.

“BAL Ambassador and NBA Legend Pops Mensah-Bonsu will organise a basketball camp in Ghana next month (August). The camp aims to identify and raise upcoming young talent from Ghana to be trained and allow them to play at the highest level, thus enhancing Ghana's basketball,” Nicolas Pompigne-Mognard indicated.

While Pops Mensah-Bonsu cannot do it alone, the local federation must join in to regularly organise these basketball camps to not only expose young people to the sport but also develop talents.

Ghana has been a part of FIBA since 1962 but unfortunately, the Ghana Basketball Association (GBBA) has been unable to grow the sport in the country as expected.

He has given the assurance that APO Group is committed to developing sports on the continent in a way that will promote education, peace, violence prevention, as well as health.

Hottest Photo Reports
Catch up with all the political quotes from our politicians.
Advertise here
More from Basketball
ModernGhana Links
Celtics great Bill Russell, 11-time NBA champion, dead at 88
NBA: Hornets bring Steve Clifford back as head coach
How the Boston Celtics hope to come back better in 2022-23
TOP STORIES