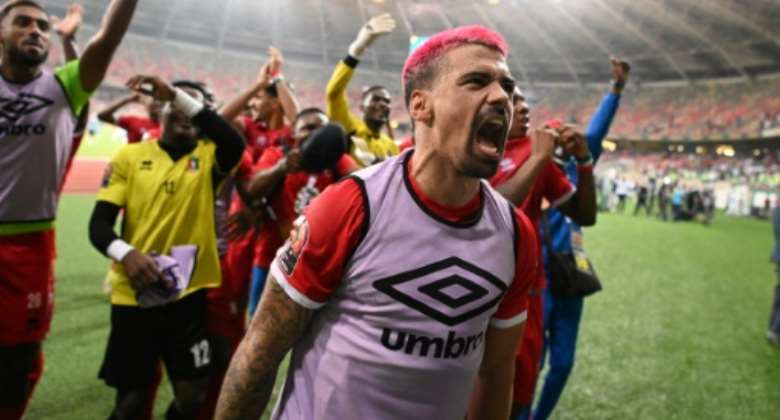 Man of the match Iban Salvador Edu leads the Equatorial Guinea celebrations after they stunned Algeria. By CHARLY TRIBALLEAU (AFP)

Equatorial Guinea inflicted a first defeat in 36 games on Algeria on Sunday to leave the reigning champions in serious danger of a group-stage exit from the Africa Cup of Nations after an astonishing goalkeeping blunder cost the Ivory Coast victory against Sierra Leone.

Esteban Obiang, one of a host of Equatorial Guinea players who were born in Spain, scored the 70th-minute goal that gave his side a 1-0 win in Douala as Algeria lost for the first time since October 2018.

That unbeaten run ends just two matches shy of Italy's recently established record of 37 without defeat and Algeria now need to beat the Ivory Coast in their final Group E outing on Thursday if they are to make the last 16.

Djamel Belmadi's side could only draw 0-0 with Sierra Leone in their opening game in Cameroon and if they do not succeed against the Ivorians it will be the fifth time in six Cups of Nations that the holders have failed to go beyond the group stage of the finals.

The only exception in that time came in 2019, when reigning champions Cameroon lost in the last 16.

"Everyone was talking about our unbeaten run but now we need to focus on something else, go out and secure qualification," said Belmadi.

An Equatorial Guinea side ranked 114th in the world and 28th in Africa are now well placed to reach the knockout stage for the third time.

The two previous occasions came when they were hosting the tournament, in 2012 and in 2015, but this time many of the fans in the crowd of almost 12,000 in Douala were supporting the 'National Thunder'.

Equatoguinean capital Malabo, on the island of Bioko, is a short hop over the Gulf of Guinea from Cameroon's economic capital.

"We feel very proud to beat the best team in Africa," said their coach, Juan Micha.

It was a dramatic day at the Japoma Stadium, where Badra Ali Sangare's incredible injury-time error gifted Sierra Leone a point in a 2-2 draw with the Ivory Coast.

With the Elephants leading 2-1, Sangare went to catch a ball headed back to him by a teammate in the third added minute in an attempt to prevent a corner, only to drop it into the path of Steven Caulker who squared for substitute Alhaji Kamara to score.

That remarkable moment prevented the Ivory Coast from wrapping up qualification for the last 16.

Sangare, who has taken over the gloves at this tournament because first-choice Sylvain Gbohouo was handed a doping ban, then went off injured, leaving right-back Serge Aurier to see out the match between the posts.

Before the late drama the 2015 champions appeared to have a second win in as many games sewn up thanks to Nicolas Pepe's second-half strike.

Wahbi Khazri (2L) celebrates with teammates after scoring in Tunisia's win over Mauritania in Limbe. By Issouf SANOGO (AFP)

"Honestly I can't explain that goal. You could have Jurgen Klopp or Pep Guardiola in charge and they wouldn't be able to prepare for that," said Ivory Coast coach Patrice Beaumelle.

Franck Kessie had an early penalty for the Elephants saved but Ajax star Sebastien Haller put them ahead and Musa Kamara made it 1-1 before Pepe struck.

Elsewhere, Wahbi Khazri scored twice as Tunisia recovered from a controversial loss to Mali by hammering Mauritania 4-0 in the coastal town of Limbe to register their first points in Group F.

Mali and tournament debutants Gambia both sit a point above Tunisia on four points after they drew 1-1 at the same venue, Musa Barrow converting a 90th-minute penalty for Gambia to cancel out Ibrahima Kone's 79th-minute spot-kick at the other end.

The final round of group games begins on Monday when hosts Cameroon play Cape Verde and Burkina Faso face Ethiopia in Group A.