VIDEO: Watch how Hearts of Oak defeated Eleven 4-1 in Accra 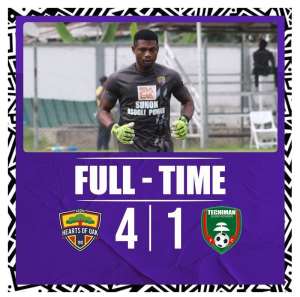 Hearts of Oak have edged closer to the top four of the Ghana Premier League standings following a massive 4-1 win against Techiman Eleven Wonders on Sunday afternoon.

Although the Phobians only won the Ghana Premier League title last season, the team is struggling to secure needed results in the ongoing 2021/22 campaign.

Not giving up on challenging for the title, Hearts of Oak today set up strong at the Accra Sports Stadium when the team faced off with Techiman Eleven Wonders.

Fortunately, Coach Samuel Boadu got his selections and tactics right with the team running riot to brush aside the opponent with ease.

Talented midfielder Salim Adams scored to give Hearts of Oak the lead after 19 minutes in the first half, before an early second half brace from striker Kofi Kordzi in the second half put the hosts in control with a 3-goal lead.

Later on, Daniel Afriyie Barnieh equalized with a fine effort but with 6 minutes to end proceedings, a Tetteh Nortey strike meant that the game ended 4-1 in favour of Hearts of Oak.

From today’s result, Hearts of Oak have moved to 6th on the Ghana Premier League table with Eleven Wonders 17th on the log.

Watch highlights of the game below: