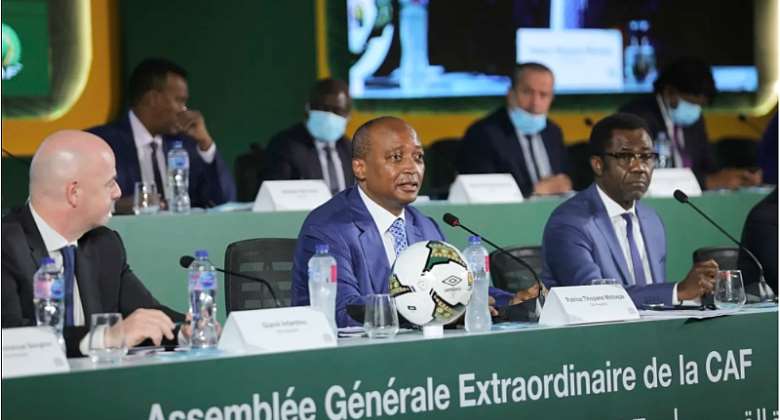 The 52 Members of the Confederation of Africa Football (CAF) today unanimously voted to support the proposal for a biennial FIFA World Cup.

Also in attendance was a delegation led by two Ministers from Cameroon – the next hosts of the TotalEnergies Africa Cup of Nations; Minister of State And General Secretary in the Presidency of Cameroon Ferdinand Ngoh Ngoh and the Minister of Sports Prof. Narcisse Mouelle.

The meeting discussed a number of matters relating to the development of football. There were also a number of presentations from various experts including Arsene Wenger, the FIFA Chief of Global Football Development.

On the FIFA International Match Calendar for men and women, the Member Associations unanimously voted in support of the proposal for biennial FIFA World Cups.

CAF President Dr Patrice Motsepe told the delegates that good progress is being made in building CAF and African Football to be globally competitive.

The CAF President spoke about a need for partnerships that will ensure that CAF over the years will become self-sustainable.

“Africa will do what is in the interest of Africa, this is clear. As Africa, we will look at what our interests are, and we will work with whoever shares these interests. We also have an obligation to contribute to the growth and success of football worldwide and are committed to making our contribution.”

FIFA President, Gianni Infantino lauded the progress under the leadership of CAF. He said: “It has been nine months since you, CAF delegates, elected this new leadership and this President. These nine months have been of progress and of reforms. Today we are building from this progress. This new CAF is about reforms, it is about innovation and bringing about change in Africa. This leadership is working towards advancing the interest of football in Africa.”

Minister of Sport and Youth in Egypt, Dr Ashraf Sobhi said: “Egypt has always been an integral part of actions towards progress in Africa. We have to place football in Africa in the right place and we have the willpower that does not waiver. We stand side by side with our African brothers to advance football which is the most popular sport in the masses of our people. I thank both FIFA President Infantino and CAF President Dr Motsepe for their leadership and their collaboration.”

The delegates endorsed the idea of extending the terms for a period of up to 30 days after the 2022 CAF Annual Ordinary General Assembly.