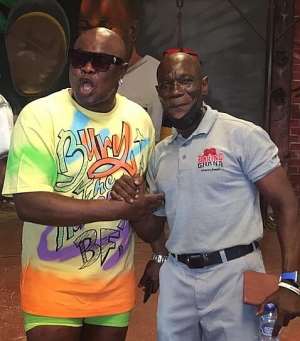 10 bouts will be on the bill as the new boxing company, S3 Promotions of Bukom stage their maiden show at Akropong in the Eastern Region on Sunday, October 17, 2021.

Two National titles will be at stake for the chiefs and people of Akropong and Akwapim to celebrate their annual Odwira festival.

The bouts will be held at the Forecourt of the chief’s palace and no gate fees will be charged. It's free.

Coach Suleman Korley, trainer of Musa Lawson who fights Victor Kemavor for the national Super Welterweight title said they are ready to rumble.

Bronz Gym coach Carl Lokko who handles Jacob 'The Beast' Dickson (7 – 0) said they are also ready for the experienced Stephen Abbey who has a record of 36 fights, comprising 17 wins and19 losses. For the national Cruiserweight title.

Stephen Abbey said the at night will see what will happen.

Another boxer on the bill, Kpakpo Allotey with17 bouts (13 KOs), one lose said his opponent should expect a good fight.

The sponsor of the event, Upplaus Consulting representative, Debbie said the people of Akwapim are warriors and preparation are advanced for a wonderful show.

She assured that all Covid-19 protocols will be observed.

"We expect a big event, but everyone should beware of the protocols.

Tourism will be one of the top activities on the agenda as well as health screening, football match, and leisure programs at the waterfalls" she expressed.

Braimah Kamoko aka Bukom Banku will thrill fans with his new Asokpor music.

Meanwhile, Banku says he has some more bouts to fight before retiring from boxing. He advised the youth to be obedient and respect elders.