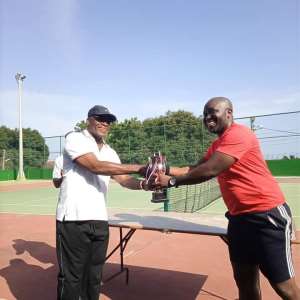 William Amoo emerged as the winner at the end of McCarthy Hill internal Tourney during the Founders Day holiday.

William played magnificently in a 6:1 victory over Lord Arhin at the McCarthy Hill Tennis club court.

William had a smooth ride to the finals as he defeated Martin Mullar 6-1 and continued his fine form beating Isaac Quartey-Papafio 6-2 in the semifinals before overcoming Lord Arhin in the finals.

Speaking to this reporter, William said, "I would consider it as the best week of my life so far."