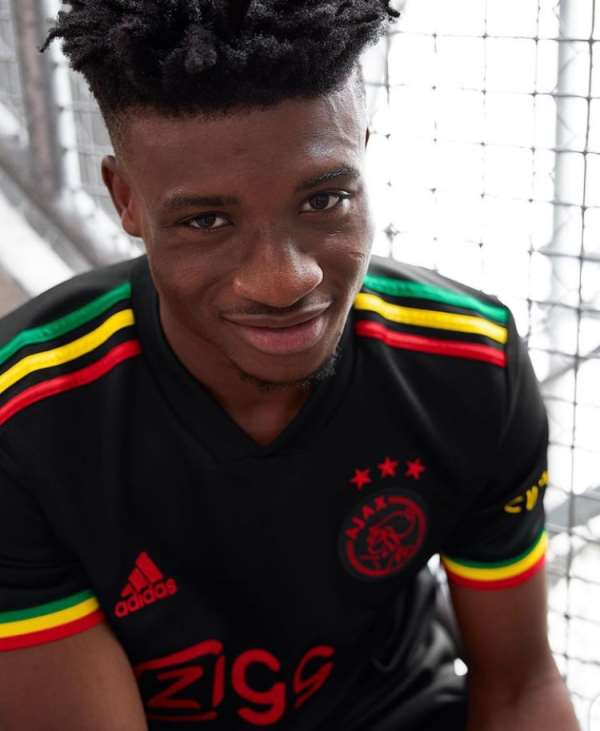 The former FC Nordsjaelland was among the few Ajax players selected to outdoor the club's new kit designed by their sportswear providers Adidas.

The jersey was unveiled by Ajax on Friday to express their love to Reggae legend Bob Marley and his iconic song dubbed three little birds.

The club's announcement reads "Ajax and adidas will present the third kit for the 2021/2022 season on Friday, in close collaboration with Bob Marley's family. The kit is a tribute to the Ajax fans and shared love for reggae legend Bob Marley and his iconic song Three Little Birds.

"The black uniform has red, yellow and green details. On the back of the shirt, just below the collar, a subtle reference to the song is visible: three small birds, resting on the Amsterdam Andrew's crosses, in the three different accent colors. The kit is the second kit for European matches, in addition to the home kit.

"The story of Ajax, Bob Marley and Three Little Birds began in August 2008, when Ajax played a friendly against Cardiff City FC in Cardiff (Wales). Afterwards, the Ajax fans were asked to stay in the box longer. To entertain the patient Ajax players, the stadium DJ decided to play some more songs. One of those songs was Three Little Birds. The rest is history. It has become a true symbol of hope, with fans singing it regardless of their standings," the statement added.

Mohammed Kudus, who joined the Dutch champions in the summer of 2020, has struggled with injuries despite having a good first season.

He won the league and cup double last season and was named the best U-21 player in the Eredivisie.

The Right to Dream Academy graduate has also had a good senior national team campaign since he earned his debut call-up during the AFCON qualifiers in 2019.

He has since scored twice for the Black Stars in five appearances.

Below are the pictures