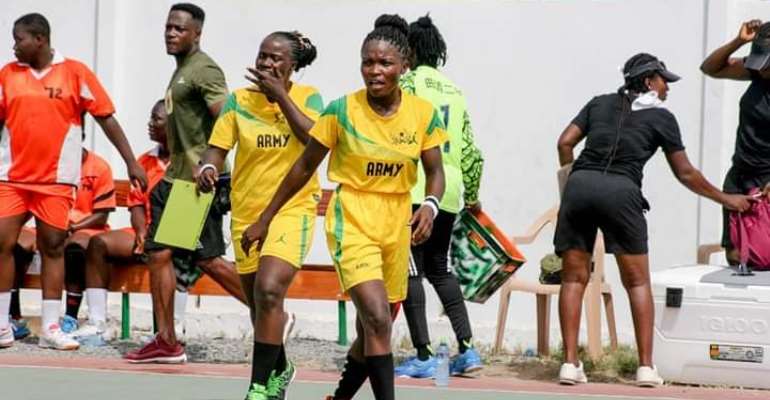 The Ghana Army Handball Team on Friday prevailed over their opponents to qualify to the quarter-finals in the men and women division of the ongoing GAHLCA League Cup knockout phase at the Prisons Handball Court.

The Soldier women played the opening game of day two of the knockout against civilian giants Cantonment Youth.

It was a loose fight for team Army since Cantonment Youth has lost most of it, key players, to the security service teams.

Ghana Army dominated the game from the start to the end with a 30-18 scoreline. Army number 10 was the goal queen with 6 goals.

It was time for schooling as Legonite took on Ghana Army in the men's division. One game that drew people to the handball court.

Legonite schooled Army in the first half with a 13-10 scoreline leaving the Soldiers in a confused state.

Ghana Army did not give up as they were poised in the second half to level their goal deficit. The soldiers missed some of their key players like Seth Botchwey due to injury and also their captain who is on course.

Legonite on the other hand had a perfect class attendance but could not utilize it as most of their chances were swollen by the air and also blocked by the Army defense.

The Burma Camp favorite charged up and leveled their goal deficit. They fought all out and ended the game with a 26-23 scoreline.

In all, 3 Red Cards were recorded, two by Army players and one from Legonite making it the first Knockout game with Red Cards.

Jersey number 4 of Army scored the highest with 8 goals.

Meanwhile in the ongoing 2021 league, out of 3 matches played Army has won 2 and lost 1 whilst Legonite has won 1 and lost 2. Ghana Army took on Legonite in their first league game and won with a 27-25 final scoreline.