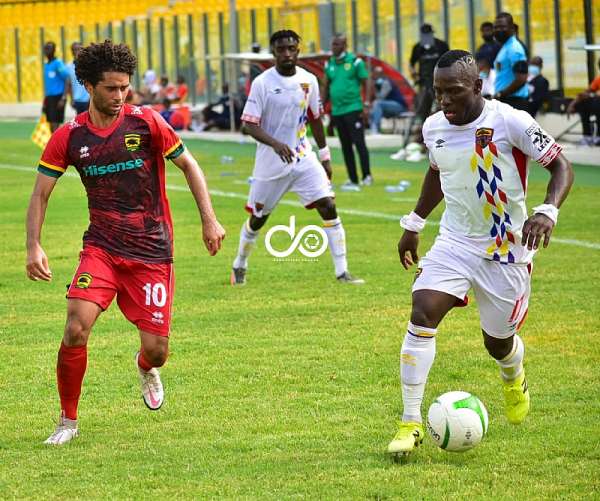 Asante Kotoko and Hearts of Oak produced an exciting contest at the Accra Sports Stadium on Sunday afternoon in the first Super Clash of the 2020/2021 Ghana Premier League.

The two teams locked horns today to clear an outstanding match in the ongoing season originally scheduled to be played on February 14 as a Matchday 14 fixture.

Going head to head today, the rival clubs known as the two most successful clubs in Ghana put on an exciting game that unfortunately could not produce a goal.

On the Matchday, Asante Kotoko had a penalty kick after just two minutes into the first half. Prolific striker Kwame Opoku stepped up to take but his effort was well saved by Hearts of Oak goalkeeper Richard Arthur.

In the action-packed encounter that ensued from there on, the Phobians dominated but could not capitalize on the goal-begging chances that came their way.

Just like Kotoko, Hearts of Oak was also awarded a penalty kick in the second half but they were unable to convert.

Razak Abalora dived to his left to parry the effort of substitute Isaac Mensah to ensure the game stayed goalless.

Although Kotoko will threaten the goal of Hearts of Oak in the final 10 minutes, the game still ended goalless with both teams going home with a valuable point.