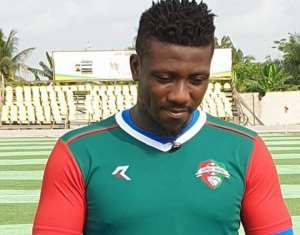 The former Aduana Stars goalkeeper joined the Nzema based side after ending his stay with Nigerian topflight Wikiki Tourist FC.

Adams has joined the club until the end of the season. He is expected to compete with first choice goalie Richard Baidoo.

The former Nkana FC shot-stopper steps in as the second signing for the Anyinase-based side in the second window after already securing the signature of forward Maxwell Boakye last week.

The 31-year-old possess lots of experience in the local league and also a national asset having guided Aduana Stars to their first ever Ghana Premier League title in the 2009/2010 campaign.

Also, with the national team, Stephen Adams was the country's first choice goalie in the 2014 CHAN tournament where they finished as runners up to Libya conceding just a goal in the process and also made the Black Stars squad for the FIFA World Cup in the same year.

Karela United have been sensational this season losing their long home invincibility to Kotoko last Sunday leapfrogging them from the summit of the log to the second position with 22 points.

We voted massively for Akufo-Addo but gov’t has denied us de...
56 minutes ago