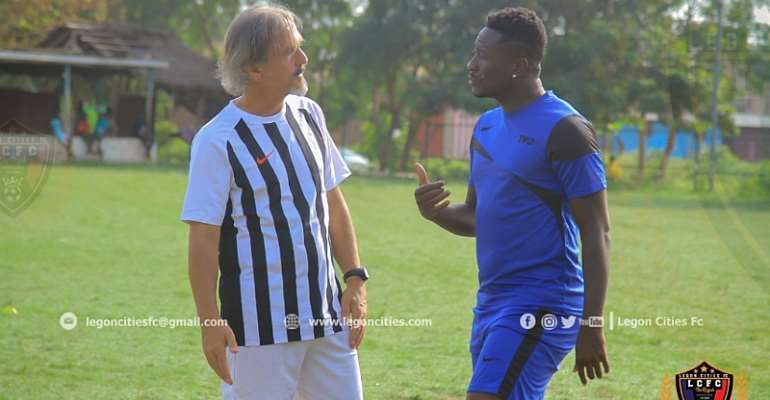 Mr. Emmanuel Olla Williams, Youth Coordinator of the Ghana Olympic Committee (GOC) has called upon Legon Cities and the Ghana Football Association (GFA) to handle Asamoah Gyan in a special way for him to stay long in the Ghana Premier League (GPL) and encourage other foreign-based professional to come home and feature for local clubs.

He said the pedigree of Asamoah Gyan can entice more companies to sponsor the GPL and attract more patronage.

According to Olla Williams, the top striker has chosen the best club that will not give him pressure from the fans, and more also Legon Cities is a club associated with musician, which Asamoah Gyan is one.

The former Black Stars captain signed for his new club as a free agent after a stint in India came to an end earlier this year.

“Somebody might say ‘he is about to retire or something’, but I am not listening to that and I am just focusing on my playing career and then I will see what happens,” he told BBC Sport Africa.

The 34-year-old, who has signed a renewable one-year deal that could last for four years, refused to rule out another stint playing overseas or forcing his way back into the national team.

His last match for Ghana was as a substitute in the loss to Tunisia at the 2019 Africa Cup of Nations in Egypt.

“It depends on how everything goes. I am a new player with Legon Cities and I have to focus on my game,” he said in response to whether the deal is a short-term move.

“Right now I need to get fit and start scoring goals and then we will see where my future lies with the national team. The boys are doing well, it is a new generation right now and I am also focusing on my personal thing and on my playing career.

“I have to do well in the league first, and that is what matters to me. I have to start playing and enjoy my football and it will happen naturally if it is meant to be. Everything depends on me.”

He would not elaborate on any other offers he had received, insisting that Legon Cities was the best club for him.

“Sometimes people forget that the Ghanaian league is also a professional league,” he said.

“I got the offer and everything was right – as a professional you have to evaluate everything. I am very proud to be in the Ghanaian league.

“The most important thing is that they were serious about the contract. I am a very serious guy, despite people seeing me as a funny guy as well, but when it comes to work, it is work. Everything is about seriousness."

“I am in Ghana and I am home. I signed for this club because they have a huge project they want to change Ghana football. I came here for a reason so while I am enjoying football, we are also doing things behind the scenes to benefit Ghana football.”

Gyan, the top goalscorer in Black Stars’ history with 51 goals, confirmed that coaching was something that he intends to pursue when he does eventually retire.

“Coaching is part of the plan,” he said. “As people know I am also a businessman but people advised me never to go out of football.

“I have to be in the game because I have done a lot in the game so it would be a bit shocking if I abandon it."

“I need to get my coaching licence which is very, very important. Some of my old colleagues have started doing a great job in coaching, so I think it is a good thing."

“I think I can be a very good coach. I don’t want to praise myself but the time will come,” he added.

Asamoah Gyan says his return to Ghana to sign for local side Legon Cities does not mean he is planning to retire.